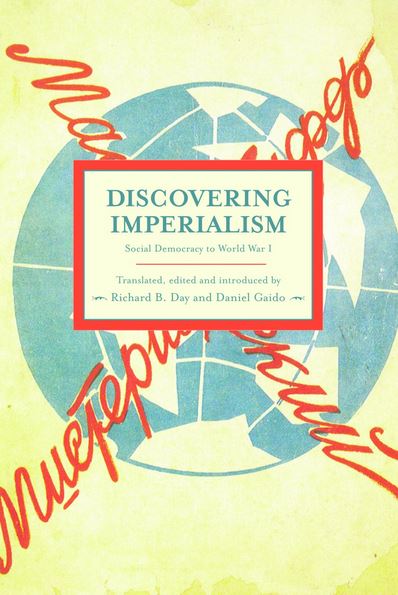 Discovering Imperialism: Social Democracy to World War I is an anthology put together by Richard Day and Daniel Gaido, in which they translate many articles not previously available in English.[1] They also give valuable introductions to the authors and the political times in which they lived. Their book raises many issues arising from contemporary imperialism, and shows the political consequences of the different ways in which imperialism was understood. Lenin’s Imperialism: the Highest Stage of Capitalism, written in 1916, is not included in the book, but it is clear that this work, although the best, was just one of a large number of publications on the question.

Many articles and debates the book covers, from the 1890s up to around 1916, remain relevant today. This is especially true for those relating to nationalism and imperialism, even though the forms taken by imperialism have changed a lot in the past century. However, the book’s articles, and its editors, do not explore a critical feature.

How was it that the anti-imperialists often had the better arguments – and sometimes even won – but they were nevertheless beaten by social forces, both inside and outside the debating forums of social democracy? A devastating, murderous war was the result, in which the working classes of the major powers fought alongside their rulers. Only in Russia was there a practical, political and successful response to the outbreak of war – led by the Bolsheviks in the 1917 Russian Revolution.

Here I want to focus on one issue that arises from a quotation the book provides from Friedrich Engels in 1885:[2]

“The truth is this: during the period of England’s industrial monopoly the English working-class have, to a certain extent, shared in the benefits of the monopoly. These benefits were very unequally parcelled out amongst them; the privileged minority pocketed most, but now and then even the great mass had at least a temporary share. And that is the reason why, since the dying-out of Owenism, there has been no socialism in England. With the breakdown of that monopoly, the English working-class will lose that privileged position; it will find itself generally – the privileged and leading minority not excepted – on a level with its fellow-workers abroad. And that is the reason why there will again be socialism in England.”

Here, Engels notes the absence of any socialist movement in England, sensibly disregarding the largely irrelevant, small socialist groupings that were around at the time. Both Marx and Engels recognised that this absence needed to be explained, since England was the most capitalistically developed country in the world and had a large proletariat. Why was this proletariat not drawn to socialism by their experience of capitalism? Comments from Marx and Engels elsewhere did note the bourgeois politics of the English ‘labour movement’, but here Engels here pins down the cause.

The monopoly of England in the world economy went well beyond industry. It was also heavily backed up by domination in the areas of international commerce and finance – shipping, warehousing, trade finance, insurance, loans, etc. For example, from 1874-193, Britain actually had a deficit on its balance of trade amounting to around 5-6% of GDP per year: exports of goods were well below imports, though the latter were principally raw materials and foodstuffs. Massive revenues from services, particularly financial ones, and from foreign investments, offset this big deficit, and gave Britain a current account surplus of around 5% per annum.[3]

All these revenues, not industry alone, gave England its economic fortune and allowed relatively favourable conditions for the working class. While Engels notes that it was the more privileged sections of workers who benefited most from this, the benefits also extended to the mass of people. This is not to say that they were always having a great time. The point was that these – even potential – benefits acted as a dampener on anti-capitalism.

This is the critical issue. The usual argument from the left is that it is the trade union or labour movement/party leaders who corrupt the masses, compromise with the bosses and back capitalism. While the practice and political outlook of these leaders support such an assessment, it also ignores how the masses themselves can be open to being politically ‘corrupted’. Workers were not ignorant of wider developments in the country or where their immediate economic interests lay. In Britain, especially, the popular press was full of stories about the colonies, foreign markets and Britain’s status in the world.

The political problem is not this so-called labour aristocracy (though this mistaken argument was also used by Lenin); the problem instead is far more fundamental. It is one where the political and economic experience of the mass of people makes them see benefits in being loyal to the rich capitalist state to which they ‘belong’.

Popular loyalty to the state is expressed very directly whenever that state is under threat or challenged by others. That is because those threats or challenges are also threats and challenges to ‘our way of life’. People may not go on a march to call for war, but they will almost always agree with potential military action, overwhelmingly support military spending and extol ‘our boys’ when they go to fight.

Getting a popular endorsement for military aggression is fairly easy when there seems to be little risk involved. In the 2001 invasion of Afghanistan, that country was not in a position to fight back. The 2003 invasion of Iraq was a little trickier for popular opinion, given stories that the evil dictator might have had ‘weapons of mass destruction’. If the opponent is a major country, then the build up of popular opinion in favour of action takes a bit longer. Still, as shown by the example of the British-German naval arms race in the early 1900s, there was enough support on both sides of the conflict-to-come to continue an escalation into war.

I would excuse Engels for his attempt in 1885 at revolutionary optimism, thinking that a future breakdown of England’s monopoly would once again lead to socialism in Britain. At least he took proper account of the current situation. If we did the same, we would be able to recognise what has happened to the mass of people in many richer countries – especially in the US, the UK and in the rest of north west Europe. It has not been a move towards socialism as their privileges in the world economy are challenged. Instead, a nationalist and pro-imperialist mentality has become more aggressive in defence of those privileges.

[1] Published by Brill in 2012. The book is over 950 pages; while the hardback is on sale for a ridiculously high price, the paperback edition is much cheaper.

[2] This text is taken from an article by Engels in the German Social Democratic Party’s Die Neue Zeit in June 1885, ‘England in 1845 and in 1885’. That article was originally published some months earlier in the English paper, Commonweal. The article is available in Marx & Engels’ Collected Works, Volume 26, p301.