I would not normally give recognition to someone who has a record of being a war criminal and who, in the usual manner of things these days, is responsible for the deaths of hundreds of thousands, if not more, but has not even been charged, let alone jailed. However, recent revelations lead me to make an exception in the case of a UK Member of Parliament, Jack Straw.

The former Labour Party foreign secretary has proudly proclaimed the importance of social relationships that give meaning, and value, to the role that individuals can play in the world. In these atomised times of extreme anomie, Straw has explained that he can earn £5,000 per day from companies hiring him, owing to his extensive contacts, experience and the advice he can give to them. Surely, this is a clear affirmation of the importance of social production!? No individual can produce anything like £5,000 alone per day.

A picture paints a thousand words. Here are two pictures, and not many words, covering two events.

One is of the European Central Bank's Quantitative Easing programme, opposed by Germany, depicting the Italian head of the central bank, Mario Draghi (left), and Germany's finance minister, Wolfgang Schäuble (right). The second is of the new Greek finance minister, Yanis Varoufakis (right) with his German counterpart (left), after not even agreeing to disagree on Greece's proposals for managing its debt burden. 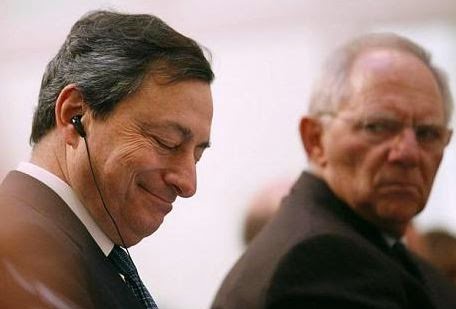