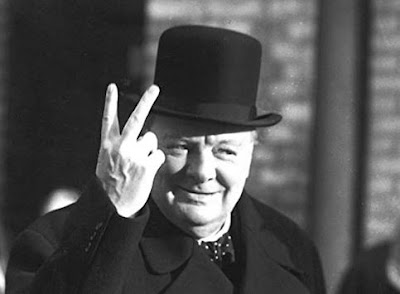 Even patriotic Brits know that their hero Winston Churchill did not win World War 2 or fly a Spitfire. What they, and others, may not know is how his statements often shed a clear light on British imperialism. From Britain’s reliance on colonies, to the political rationale for giving the working class some welfare services, Churchill’s rhetorical flourishes in speeches, newspaper articles, and deliberations with his peers, illuminate things all too often absent from contemporary political consciousness.

The text cited below is in chronological order. Information is taken from many sources,[1] including articles previously on this blog and from other material I have put onto Twitter and Facebook. But it should not overtax the modern attention span. I do not claim or aim to cover everything, and will give a few lines of context where these might be helpful.

When all of these statements were made, except one, Churchill had a senior position in the British government of the day, or had even been Prime Minister. They are not just the musings of a random reactionary and empire enthusiast.

Social welfare and a stake in the country, 1909

Social welfare measures have often been introduced by the ruling class to boost loyalty to the state, apart from the need to have a reasonably healthy and educated workforce. It has worked in rich countries. Here is Winston Churchill backing unemployment benefits in a Daily Mail article from August 1909:

“The idea is to increase the stability of our institutions by giving the mass of industrial workers a direct interest in maintaining them.

With a ‘stake in the country’ in the form of insurances against evil days these workers will pay no attention to the vague promises of revolutionary socialism.”

In a comment to his British Cabinet colleagues in January 1914, Churchill noted:

“We are not a young people with an innocent record and a scanty inheritance... We have engrossed to ourselves an altogether disproportionate share of the wealth and traffic of the world. We have got all we want in territory, and our claim to be left in the unmolested enjoyment of vast and splendid possessions, mainly acquired by violence, largely maintained by force, often seems less reasonable to others than to us.”

This is his support for the RAF's request to use mustard gas in Mesopotamia (today’s Iraq):

“I do not understand this squeamishness about the use of gas ... I am strongly in favour of using poisoned gases against uncivilised tribes. … Gases can be used which … would leave a lively terror and yet would leave no serious permanent effect [!] on most of those affected.”

Unfortunately for the RAF, no gas bombs were available at that time (April 1919). Churchill had already used most of them against the Bolsheviks! But he did find some later for use in Mesopotamia, in 1920 to help put down a rebellion. I would add that the RAF was also seen as a good, inexpensive means of putting down colonial revolts and encouraging tax payments with machine guns and regular bombs, not just gas.

And here is his opinion on using gas to subdue Afghanistan, in May 1919:

“The objections of the India Office to the use of gas against natives are unreasonable. Gas is a more merciful weapon than [a] high explosive shell … The moral effect is also very great. There can be no conceivable reason why it should not be resorted to.”

In line with his general view of the world, he only thought such gas was ‘hellish poison’ when used on white people, eg British soldiers in the First World War.

Britain returned to the gold standard in 1925, in a move roundly condemned by JM Keynes. But Keynes, always wanting to be a helping hand for British imperialism, gave no indication that he understood the logic of the move. Churchill, by contrast, was very clear in his comments at the time:

“If we had not taken this action, the whole of the rest of the British Empire would have taken it without us, and it would have come to a gold standard, not on the basis of the pound sterling, but a gold standard of the dollar.”

“I have only one observation to make on the merits. In our policy of returning to the gold standard we do not move alone. Indeed, I think we could not have afforded to remain stationary while so many others moved. The two greatest manufacturing countries in the world on either side of us, the United States and Germany, are in different ways either on or related to an international gold exchange. Sweden is on the gold exchange. Austria and Hungary are already based on gold, or on sterling, which is now the equivalent of gold. I have reason to know that Holland and the Dutch East Indies – very important factors in world finance – will act simultaneously with us today. As far as the British Empire is concerned – the self-governing Dominions – there will be complete unity of action. The Dominion of Canada is already on the gold standard. The Dominion of South Africa has given notice of her intention to revert to the old standard as from 1st July. I am authorised to inform the Committee that the Commonwealth of Australia, synchronising its action with ours, proposes from today to abolish the existing restrictions on the free export of gold, and that the Dominion of New Zealand will from today adopt the same course as ourselves in freely licensing the export of gold.”

Here is a page from Ponting’s book on Churchill's trip to Italy in 1927: 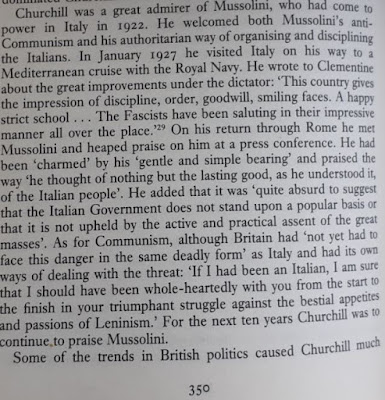 So much for Churchill being the steadfast anti-fascist!

On 15 April 1929, Churchill spoke in Parliament about the City’s revenues, and its role as a global broker, as well as the big returns on British foreign investments:

“The income which we derive each year from commissions and services rendered to foreign countries is over £65,000,000, and, in addition, we have a steady revenue from foreign investments of close on £300,000,000 a year, 90 per cent of which is expressed in sterling. Upon this great influx there is levied, as a rule, the highest rates of taxation. In this way we are helped to maintain our social services at a level incomparably higher than that of any European country, or indeed of any country.” (Hansard)

Note that both kinds of revenue noted in the quotation above do not all come from the colonies, at least not directly, and most will have derived from transactions with and investments in other major countries. Nevertheless, such revenues were important for social services even before the post-1945 ‘welfare state’. I give an updated, contemporary assessment of these in my book, The City.

Britain’s colonies and its status in the world, 1939

This is from Churchill’s address to West Indies sugar plantation owners! It is cited in Peter Fryer's book, Black People in the British Empire, 1988, Pluto Press:

These are excerpts from a 1943 speech from Churchill as Prime Minister during World War 2. The measures introduced by the Labour Government from 1945 were largely prefigured in this address. 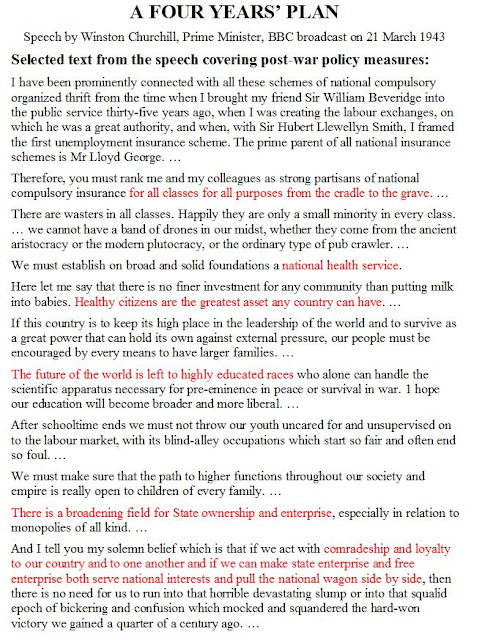 To finish with a bang, here is Churchill as Prime Minister again, thanking the Labour Party for its efforts in making the UK a nuclear weapons power:

“All those concerned in the production of the first British atomic bomb are to be warmly congratulated on the successful outcome of an historic episode and I should no doubt pay my compliments to the Leader of the [Labour] Opposition and the party opposite for initiating it.” Hansard, 24 October 1952

[1] Where not otherwise indicated, the quotations are taken from Clive Ponting’s excellent book, Churchill, 1994.