Two charts from the Bank of England sum up interesting aspects of capitalism's problems today.

First, the decline in long-term government bond yields. These have been on a steady downward trend since 1990 (actually, for even longer, since the mid-late 1980s), as shown in the following chart which gives GDP-weighted average 10-year yields for the top 20 countries. It is not only that nominal yields have fallen alongside lower inflation, but 'real yields' have also fallen and are now negative. The estimate of real yields is only approximate, but the picture is clear enough. 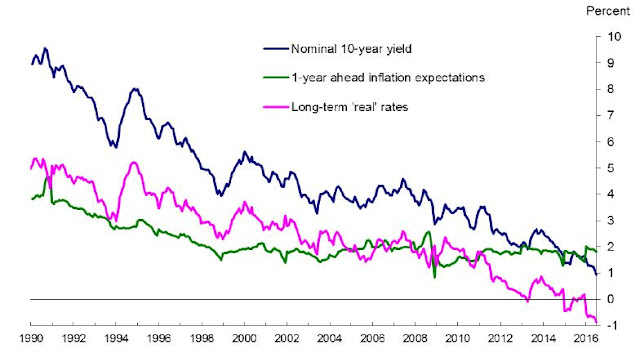 The drop in yields has been accentuated by central bank asset purchases under 'quantitative easing' (QE) policies, but not fully explained by them. Outside Japan, QE only got going from 2008. Lower yields are a problem for pension funds and other bond investors, while making the huge debts accumulated by borrowers (see earlier articles on the blog) somewhat easier to service and pay back. This delicate, unstable balance results from the difficulties the capitalist economy has had producing enough profit, or growing enough to produce anything extra at all. 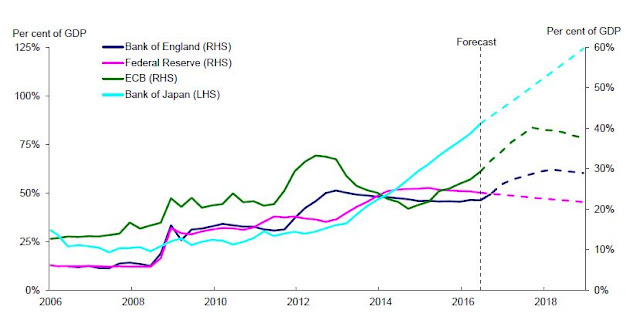 The second chart shows the shows the rise in central bank balance sheets as a percentage of GDP. This has come about as a result of QE policies, and the Bank of Japan (note that only Japan is measured on the left hand axis), the Bank of England and the European Central will add to their accumulated assets in the next few years. Only in the US has the share of GDP not gone up recently, and is not projected to under current policies. Even for the US, the absolute holdings of Treasuries and mortgage-backed securities are not likely to fall by much.