On the 150th anniversary of the publication of Volume 1 of Marx's Capital, there is a two-day conference to discuss the importance of this work for understanding the world today. This international conference is held on 19-20 September 2017, sponsored by the Department of European and International Studies, King’s College London, and thenextrecession.wordpress.com blog.

Speakers include:
The cost of attending is £10 for the two days. Other details including booking can be found here.

A May Election in June

Prime Minister Theresa May has called a UK general election on 8 June. Given the 2011 law on fixed term elections, which means that it should have instead been in 2020, this was a surprise announcement. The brought forward date has to be agreed by Parliament first, but this will very likely happen, given that the Labour Party must back it or else appear afraid to go to the electorate. However, the bigger questions are what this election will be about and what it reflects about British politics today.
The news media were puzzled, if not annoyed, in the hour or so ahead of May's Downing Street statement. Why did they not know before what was going to happen, or even have any clue? Surely this was not a declaration of war, or the UK’s own missile strike somewhere?! Could it be a resignation? Her slightly unsteady gait and frail looking pose had already led to gossip that she might be about to step down due to ill health. Surely, sacking Boris Johnson as Foreign Secretary would not demand a Downing Street declaration. A few minutes ahead of time, the tip off came to limit the media’s blushes of ignorance: it was to call a snap UK general election!
Outside 10 Downing Street, May did another of her performances trying to look a determined and decisive leader. But she remained unconvincing to anyone who has paid attention to events. The snap election was claimed to be necessary to bring about a more strongly positioned government to secure successful Brexit terms with the EU – more of a majority than the comfortable Conservative Party one of 17 House of Commons seats.[1] She claimed there was too much opposition to her planned good deeds in this negotiation within the existing parliament. This rather overlooks the problem that it does not matter what the Brits want, whether 100% of their MPs or not. What matters in the Brexit negotiations is what deal will be agreed by the 27 countries in the rest of the EU.
The UK election has instead been called for another reason, basically the dire state of the British Labour Party. Unable to act as an opposition, Labour has slipped in UK opinion polls and May stands well ahead of Labour’s Corbyn. Labour looks unlikely to win back any seats in Scotland after its huge losses to the Scottish National Party in 2015, and the Conservatives have little more to lose there. Changes in Wales or Northern Ireland will make next to no difference to the UK result. Meanwhile, in the main voting country, England, Labour is in dire straits, having been eaten by UKIP and the Conservatives in 2015, and still looking vulnerable to the Conservatives in the lead up to June 2017. The latest polls show the Conservatives with around 44-46% of the UK vote and Labour with 25-26%.
Tactics based on the latest opinion polls are not the best strategic guides, and things could go wrong for May’s latest gambit. Although probably not much wrong, given the politics of the populace. While just under half the UK voting population is not pro-Brexit, and this could grow now that some of the economic consequences for jobs are dawning, there remains a strong base of anti-immigration Brexiteers among English voters, one to which the Labour Party adapts rather than challenges. For example, so far Labour leader Jeremy Corbyn has avoided talking much about immigration: saying it is OK loses him votes; saying it is not OK would embarrass his conscience. A view on Brexit also gets little look in, apart from how it must be the best deal possible, for similar reasons. The trial of moving from being an inconsequential backbencher shuffling in the dust of a moribund left to leading, or even managing, the views of the electorate has clearly been too much for him.
The forthcoming UK general election will be both low level tragedy and farce, and tales told by many media idiots, full of sound and invented fury, signifying nothing new.

Tony Norfield, 18 April 2017
[1] It is possible, nevertheless, that this majority might have been reduced in coming months. Police investigations are taking place into Conservative Party overspending in a number of constituencies in 2015. This could have rendered invalid some Conservative victories, produced new by-elections and cut their majority.
Posted by Tony Norfield at 11:05 pm No comments: 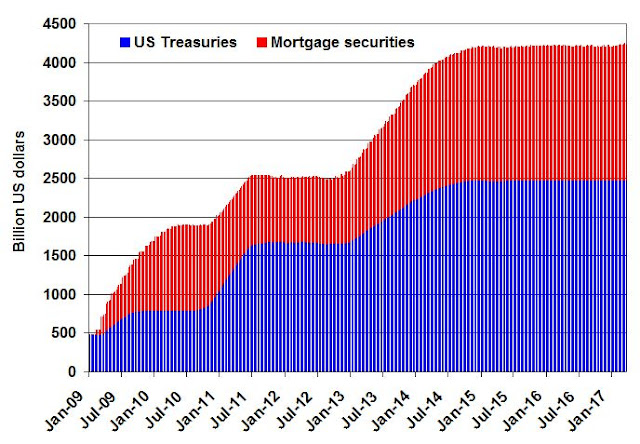 Note: * See the reviews of debt trends in a range of countries in the September 2016 articles on this blog.
Posted by Tony Norfield at 12:28 pm No comments: