Trouble in the Money Machine

Since 2008, the world’s major central banks have adopted extraordinary measures to stop a slump in the economy and to try and rescue the financial system from collapse. But while ultra-low, even negative interest rates, and quantitative easing (buying securities from the financial system) have stabilised the system for now, such policies have done little to generate growth. The economy has managed to get up from the floor, but is still staggering around and cannot climb the stairs. Meanwhile, the monetary ‘medicine’ is generating its own problems for banks and causing dislocation in the money markets.
Consider what, in recent years, has been a little noticed feature of the financial system: the ‘velocity of money’. This concept was key for simple versions of monetarist economic theory, ones that tried to explain the growth in nominal output (the money value of GDP, for example) by the growth in the money supply. I will leave aside discussion of that theory here, and just note that the monetarists usually assumed that the velocity of money was stable, in other words a given percentage rise in the money supply would lead to the same rise in the value of nominal output.[1] The fundamental equation was:
MV = PT
where
M is the money supply, however defined
V is how fast the given money supply circulated in the economy (its velocity)
P is the average price level and
T is the volume of transactions.
So, if V is fixed, a rise or fall in M feeds directly into the nominal value of transactions PT. The T term is often also taken to be the volume of output or income.
Apart from other problems with the theory – there are many – the biggest and most evident problem is that the V term is not fixed. In fact, it has been declining steadily during the crisis in all major countries! This indicates that rather than there being a stable, functioning monetary system, instead it is one that has been seizing up.
The next chart shows the pattern of moves in the velocity of money for the US, the euro area, the UK and Japan over the past 16 years or so.[2] Velocity is measured as nominal GDP divided by the most common definition of money supply in each area. Different definitions give different ratios, so the numbers have been standardised to equal 100 for each in Q1 1999.
In each area, the money supply has risen over the period shown, but the nominal value of GDP has risen by much less, so that the velocity measure has fallen. Japan’s nominal GDP did not even rise at all between 1999 and 2016! Only in the UK has nominal GDP risen by more than the money supply (since the end of 2009), but the velocity of money is still 20% below its level in 1999.[3] 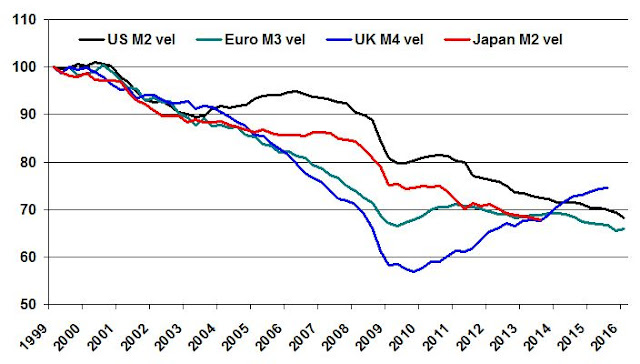 The velocity of money is a summary measure of many things that happen in the capitalist economy, since it compares the aggregate of GDP, a measure of total output, with the aggregate of diverse components of cash in circulation, bank deposits, etc. It is a useful index, nevertheless, and the general decline in the velocity of money is a clear sign that central bank monetary policy has less ability to have an impact on the nominal growth of the economy, despite their efforts to ward off the threat of deflation.

Tony Norfield, 1 November 2016
[1] The basic monetarist idea was that a rise in money supply only led to higher prices, with no lasting change in real output, and that nominal output rose only because of the higher prices.
[2] Data for the US are for M2, M3 for the euro area, M4 for the UK and M2 for Japan. Available numbers only go up to 2013 for Japan, mid-2015 for the UK and early 2016 for the US and the euro area.
[3] I’m not sure why the UK velocity number has risen since 2009, whereas others have fallen, and may look into it further.
Posted by Tony Norfield at 3:51 pm

Hi Tony could you please expand a little on the problems banks are facing and the "dislocations" in the money markets caused by central banks buying securities, to which you refer at the end of the first paragraph? Thanks