How Much Do Santa's Helpers Get Paid?

A large proportion of the world's industrial employment is in poorer countries. In 2012, the International Labour Organisation estimates that total world employment was some 715 million, but only 106 million jobs were in developed economies and the European Union. The biggest number of industrial jobs among the richer countries was in the US, with 26 million, but this figure fell from 31 million in 1991. The striking contrast is with the poorer countries. China employed 234 million in 2012, up from around 135 million in 1991. India's industrial employment more than doubled over the same period to 113 million, and similar developments have occurred elsewhere. Indonesia now employs 24 million and Brazil 21 million industrial workers. As many people are aware, the growth of the industrial labour force in poor countries and the shrinkage in rich countries has been a factor in so-called globalisation. The economics behind this shift of employment, and production, is the relative cost of hiring workers. While there may be other factors impacting business decisions, from tax breaks to sources of cheap energy, labour costs are the main influence over the location of production.

The next chart gives the latest picture for the hourly 'labour compensation' in different countries for the year 2013. Compensation refers to the sum of both wages paid and various benefits available to the worker. In general, the amount of non-wage compensation is very low in poor countries. These data are taken from the US Conference Board's publication a few days ago.

I have included both China and India in the chart, although the Conference Board lists their data separately because their labour cost numbers are not seen as being comparable with the data for other countries. In addition, the Conference Board data is for 2011 (India) and 2012 (China), so I have made adjustments to produce a figure for 2013 based on reported wage increases and on the moves of India's and China's currency exchange rates against the US dollar.

Each country in the chart is indicated by its two-letter ISO code (CH is Switzerland, CN is China, BR is Brazil, IN is India, PH is the Philippines, etc). The chart also mainly shows richer countries. Partly I have to do this because there is no comparable data available for some of the poorest countries, eg none for Bangladesh or Indonesia. Also, I do this to make a point: in the current 'festive season' for the richer countries, many of the presents Santa Claus will bring have been produced by workers enduring oppressive conditions and earning a wage (and not much else adding to 'compensation') that is a small fraction of the wages available to workers in countries receiving the presents. 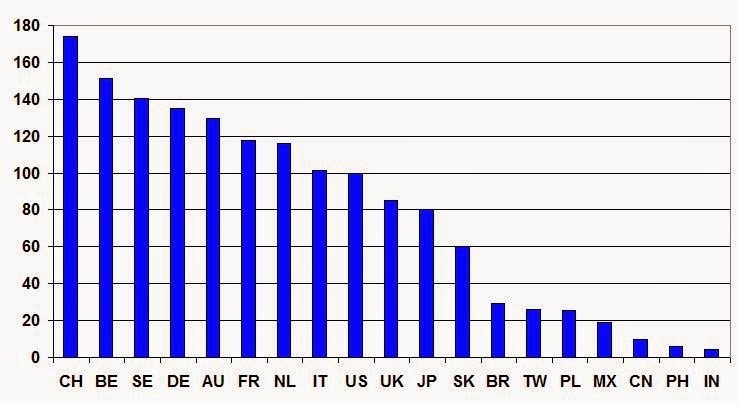 Notably, although the US is the base country for the compensation index shown, the US figure is well below that seen for several European countries and also Australia. Switzerland, Belgium and Sweden stand out here, with numbers more than 40% higher than in the US. South Korea (SK) is at 61% of the US figure, then there is a big drop down to the compensation number for Brazil (BR) at 29%, then Taiwan, Poland and Mexico. China, the Philippines and India come last, with the Conference Board data (and my estimates) putting China's workers at an average of just below 10% of the US number, and India at just below 5%.

A final comment on the statistics: how far do the wonders of the global market work to lessen wage inequalities over time? Surely, if workers are expensive in the richer countries, there will be a shift of production to countries where workers are cheaper, and eventually this will reduce the wage gaps. The Conference Board's data show something like this in the case of China. But the hourly compensation costs in China rose from a minuscule 2.2% of the US number in 2002 to just 8.6% in 2012. These data are for a 10-year period long after the influx of foreign capital and the expansion of Chinese production began and the result remains that Chinese workers are on less than 10% of US worker compensation. The most significant example of catching up is seen in South Korea, where the ratio rose from 40% to 60% between 1997 and 2013. Other Conference Board data comparing 1997 with 2013 show far less catching up with the US: the Philippines ratio rose from just 5% to 6%. In Brazil, the ratio fell from 31% to 29%; in Taiwan from 31% to 26%. This is a neat indication of the way in which the stratification of the imperialist world economy is not overcome by market forces.

Bush and the Brazilians

This being December, I have been reading more about mathematics. However, this was in the context of the excellent Simpsons cartoon, on which the science writer Simon Singh has produced an illuminating book: The Simpsons and their Mathematical Secrets (Bloomsbury, London, 2013).

The book is too good to summarise in a brief note, but I just wanted to share one of the jokes he presents as an aside from the interesting analysis:

'My God!' shrieks President George W Bush, and he buries his head in his hands. He remains stunned and silent for a full minute. Eventually, he looks up, takes a deep breath, and asks Rumsfeld: 'How many is a brazillion?'