Just in case you were still thinking that there was some economic logic to the madness of Brexit, let me enlighten those of you who might give some credence to an open vista of exciting trade opportunities outside the EU. After all, there are many things most British politicians (and journalists), even those who are against Brexit, do not generally understand.
One is that a so-called ‘customs union’ deal with the EU would not involve services – not simply financial services, but also legal, accounting, software, design and general business services. Just ask Turkey, which has such a customs union deal.
Another major point is that the great world outside the stagnating, troublesome EU is already, how shall I put it, divided up. This is something that Liam Fox, the airmile-hogging chancer who is currently the UK’s Secretary of State for International Trade, has been finding out. After two years or so, he has done post-Brexit trade deals with … Switzerland, Chile, the Faroe Islands, Papua New Guinea and Fiji.
The following table highlights this latter point. It shows the top 20 countries by nominal GDP in 2018, on IMF data measured in terms of how many billions of US dollars, and also the major trade deals that each one has with other countries. (Also note that the EU bloc of 28 countries is the second largest economic area, having a single market among members and trade agreements with 36 non-member countries.) The focus here is on economic deals relating to trade, rather than other more purely political or military cooperation agreements.

In the table, the following abbreviations apply:

APEC: Asia Pacific Economic Cooperation group of 21 Pacific Rim economies
ASEAN: Association of South East Asian Nations, including 10 countries in South East Asia
CPTPP: Comprehensive and Progressive Agreement for Trans-Pacific Partnership of 11 countries, including Mexico, Canada and Japan. This is something the UK could join post-Brexit, but there has been no news on any such developments. The US pulled out of the previous TPP, but the remaining members went ahead with this CPTPP excluding the US, after suspending 22 provisions the US favoured that the others opposed.
Gulf Cooperation Council: a grouping of six Arab states, the main members being Saudi Arabia and the UAE (with Qatar now under an embargo).
Mercosur: a changing membership of around six countries, due to political disagreements. Principal members are Argentina and Brazil.
NAFTA/USMCA: The US pulled out of the North American Free Trade Agreement with Canada and Mexico under Trump, but will replace it with the US-Mexico-Canada Agreement (USMCA).
SCO: Shanghai Cooperation Organisation, key members of which are China, Russia, India and Pakistan, plus four East European ex-Soviet states and many observer and ‘dialogue’ states.

For other details, of which there are many, look up Wikipedia! 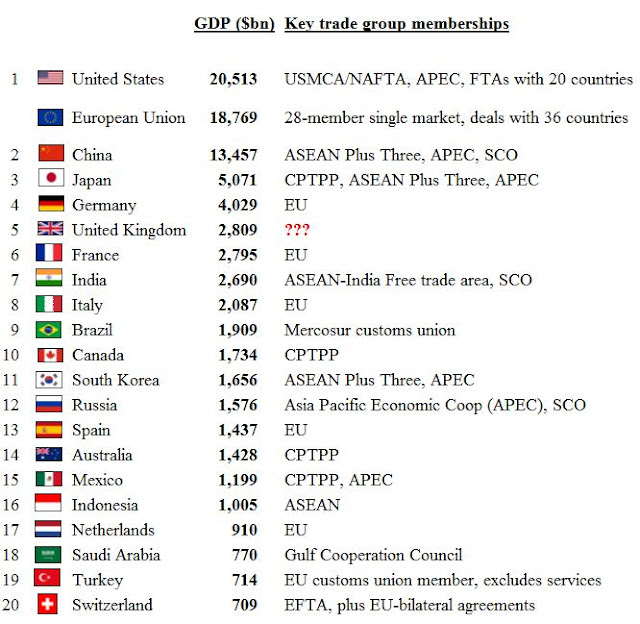