I will be presenting on a panel at Manchester University's 2017 Post-Crash Economics Society Conference, held on the weekend of 18-19 March.

Some organisational and booking details are given here, together with a link to the programme. I reproduce the latter below, but the text may not be clear. 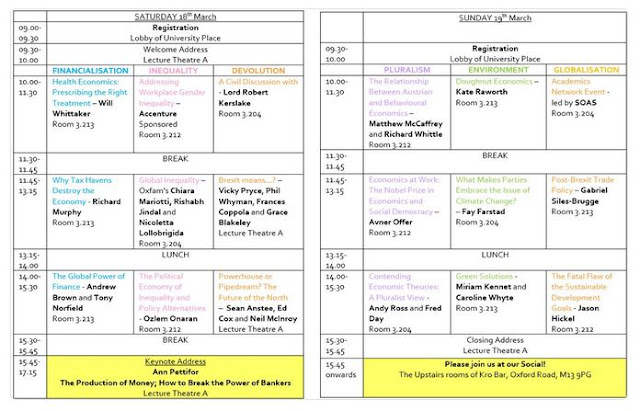 The Politics of Counting Billions of Beans

Just in case you were one of the half dozen or so people who thought that Brexit would be a simple affair, the UK's House of Lords European Union Committee has produced a report. Published yesterday, Brexit and the EU Budget is a 65-page analysis, with hyperlinks to the detailed evidence given on more than 70 questions and references to a multitude of EU-related documents. As one expert witness put it, there are 'many unknowns'. The chairman asked: 'Are these known unknowns or unknown unknowns?' The response was: 'All of them'.

The report covers the UK's potential liabilities to the EU and details the kinds of asset over which it might have a claim. Estimates in the media have claimed the net UK exit 'bill' as being anywhere from zero to 60 billion euros or more, and these different takes are analysed. However, the general conclusion is that all of this comes down to politics and a trade-off between different areas as part of the broader exit negotiations. It is not a thrilling read, but an instructive one that spells out the complex web of relationships within the EU.

What is Marx’s Value Theory Worth?

Tony Norfield, 1 March 2017
[1] I have little confidence in being able to track movements of the rate of profit through official statistics, although one does get indications of the underlying movements from the behaviour of major capitalist companies and reports of investment that suggest a rising organic composition of capital. Official data are focused on an individual country, and do not fully allow for international influences, something especially important for the US. Statistical conventions for counting the ‘value added’ by the financial sector make things worse, as exemplified by UK GDP income data in 2008 showing a higher operating profit for UK banks when the company reports, and Bank of England data, showed a very sharp drop, often into losses! This is apart from the multitude of accounting tricks that large corporations use to relocate the origin of their profits, including through tax havens.
Posted by Tony Norfield at 8:46 pm 7 comments: