Airbnb's As and Bs

You would think that in a capitalist market one person’s million dollars would count the same as another’s. After all, money is the measure of all things, as is shown by the nonsense of putting a price on carbon emissions, or by economists judging how much you value having access to water by the price you would be prepared to pay for it. But in the mechanism of imperial finance, such equality does not hold.

This is most clearly shown in what is allowed by the powers that run the financial system. For example, the US makes sure that its dollar-dominated international banking network only accepts or pays funds from companies or countries that do not face its many sanctions. That is evident to those who read the news media. What is far less obvious are the ways in which, even among the rich, and even within the US itself, the financial system offers other means of reinforcing the inequality of wealth and power.

Take Airbnb’s recent sale of shares on the market in its IPO. The company raised around $3.7bn by selling a small stake in its ownership via 51.55 million so-called Class A shares, and that valued the whole company at around $47bn. A big jump in its shares from the offer price of $68 to around $140 gained market news attention, but a more interesting story was in the background, one that concerns what a Class A share represents.

Class inequality, even among capitalists

As I have pointed out before in reviews of Google, Facebook and other Big Tech companies, contrary to common prejudice, Class B is better than Class A. The A shares give the holder just 1 vote each. By contrast, Airbnb’s B shares have 20 votes each. This is an extreme divergence, even by Google/Facebook standards, where the B/A ratio is 10/1. The B shares were not on sale, and they are principally held by the company’s three founders and an American ‘venture capitalist’ firm, Sequoia Capital.[1]

So, the 51.55 million A shares have that many votes, while the more than 300 million B shares have around 6 billion votes! It also implies that no matter how many further share offers there are of A shares, it is very unlikely that the small number of holders of the B shares will ever lose control of the company.

I should add here that I don’t care about this. I just want to point out a growing practice that favours monopolistic control of business resources, and one that gets little coverage.

More usually, the news media will focus on other things, such as the elaborate schemes employed by such companies to avoid taxation. Recently there has also been discussion of the monopolistic barriers to entry set up by such companies, and the ‘buy or bury’ tactics used by Facebook and others.

By contrast, this is a more hidden feature of the contemporary capitalist markets that flagrantly contradicts notions of ownership implying control. It is nevertheless quite consistent with the other aspects of the monopolisation of economic power seen today.

[1] There are also Class C and H shares, also with no voting power, but these are not relevant to the points made here.

Posted by Tony Norfield at 4:45 pm No comments:

In January 1945, Mao Tse-tung[1] sent a message to US President Roosevelt asking to visit the US and discuss future relationships with China. The message got blocked by a US diplomat in China, and Roosevelt apparently did not receive it. But its existence is not disputed. Mao’s request was even referenced by the same diplomat in his telegram to Roosevelt some days later.

By 1945, Mao’s armed forces had gained the upper hand in the fight against the Japanese in China, outdoing the Koumintang troops run by Chiang Kai-shek, despite the latter getting much more military support from the Americans. The US was basically backing both sides in China at this point. It knew that Chiang was a self-aggrandising crook (his nickname among American diplomats was ‘Cash My Check’). Some US diplomats were also open to the ‘communists’, seeing them only as focusing on agrarian reform and economic development, and also recognising their military prowess. Remember too that this was a time for the Americans when rabid anti-communism had not yet fully taken hold, and it was in any case focused on the Soviet Union.

According to an important article by Barbara Tuchman,[2] the previously mentioned diplomat, Patrick Hurley, was following the basic line of American policy. This was to get unity of the two Chinese forces, but under the control of the Kuomintang. The growing relative strength of Mao’s side was underestimated, and US officials believed that a ‘democratic’ – and pliable – China was there for the taking after the defeat of Japan. They did not anticipate the anger with which the apparent US rejection of the request from Mao would be received.

The relevant text of the message relayed by US military observers in Yenan to the US office in Chungking was as follows:

Yenan Government wants [to] dispatch to America an unofficial rpt unofficial group to interpret and explain to American civilians and officials interested the present situation and problems of China. Next is strictly off record suggestion by same: Mao and Chou will be immediately available either singly or together for exploratory conference at Washington should President Roosevelt express desire to receive them at White House as leaders of a primary Chinese party.

One can speculate on what might have happened if Mao and Chou En-lai had made the trip, which would have been Mao’s first trip outside China. Tuchman recognises that many other domestic US and world political events made it very unlikely, even if the original telegram had got through, and even if Roosevelt had lived longer. But she notes that there might have possibly been a different future course of events, including for Korea just a few years later.

There is a lot of mythology about the history of Chinese communism. China was backed into a corner by imperialism, war and the threat of further intervention. But Mao would have been happy to come to some kind of deal with the US – not the colonial British and French – to get support for economic development.

The images below are from pages 10 and 12 of a long telegram from Hurley to Roosevelt on 13 January 1945. 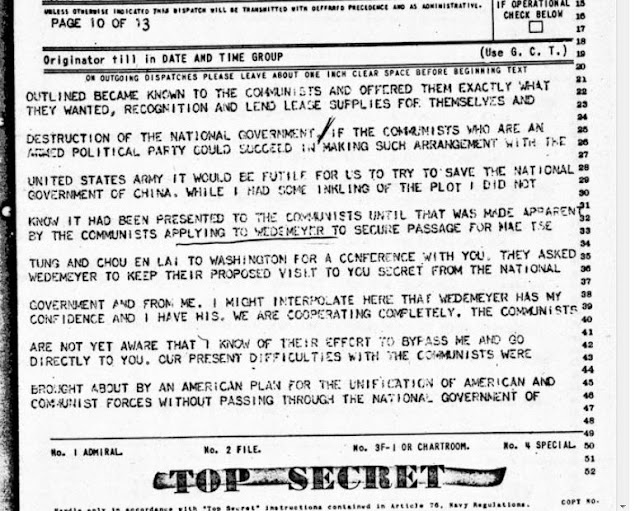 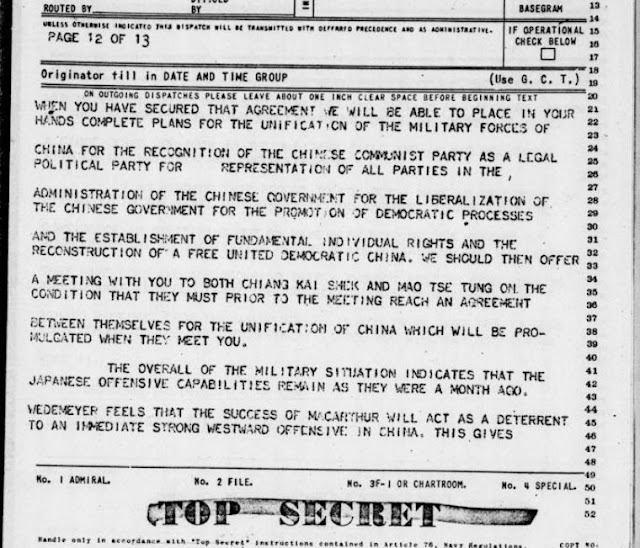 [1] Here I shall refer to the old anglicised spellings of the Chinese names, given the telegrams noted below from 1945.

[2] ‘If Mao Had Come to Washington in 1945: An Essay in Alternatives’, Foreign Affairs, October 1972. Much of the information here is taken from this article, which also gave good references allowing a search of the US official archives. I could find no online copy of the original message from Mao to Roosevelt that was relayed via US military observers in Yenan to the US office in Chungking, China, but note its message in the main text, using Tuchman's article. I did find a copy of Ambassador Hurley’s later telegram to Roosevelt in January 1945 that confirmed such a request had been made, shown in the two images above. An amusing biographical profile of the ‘erratic’ Hurley is available on Wikipedia.