The table below is an update of some figures shown in the first article on this blog, 'The Economics of British Imperialism' in May 2011. That article covered the broad mechanism in play, something I am still researching, particularly its financial aspects. This table only refers to one dimension of the total picture, but an interesting one nevertheless. It shows the profit rates of outward UK direct investment, in total and by geographical region, including some key countries.

Profit rates are calculated by measuring company earnings divided by the average value of share capital and reserves owned by UK companies in that year and the previous one. The same pattern of profit rates applies for these numbers that go up to end-2011 as the for the ones to end-2009 in the 2011 article: the bulk of FDI assets are located in the richer countries, but a much higher profit rate is gained from the poorer countries. There are exceptions, especially for UK investment (largely in mining operations) in Australia. However, the overall divergence is clear. Africa, Asia (including the Middle East in these data) and Brazil stand out as sources of huge premium investment returns compared to other locations. The India numbers probably explain UK Prime Minister Cameron's visit last month to India, together with representatives of more than 100 British companies.

It seems odd that there would be such a divergence in profit rates. After all, if a higher profit rate is available elsewhere, then why does not more capital migrate to that country, rather than stay in one of the richer countries? This raises bigger issues about the monopolistic structure of the world market, whether there is much of a process of equalising rates of profit in the world economy, and whether having a presence in major, rich markets is necessary from the perspective of maintaining commercial control of major consumer markets, even if it turns out not to be directly profitable. Or, alternatively the data may just be rubbish, hiding the real locations of company operations and/or giving the wrong view of the returns on investment! One obvious problem here is that companies can relatively easily relocate the location of their profits to countries with lower tax rates, whether by charging 'licence fees' to a pretend headquarters in a tax haven, or by some other means of transfer pricing.

John Smith, cited elsewhere on this blog, has argued correctly that one should distinguish FDI by its type: where is the productive FDI capital located, as opposed to the commercial or financial capital, or other unproductive operations? In addition, what may appear to be productive capital might be getting most of its 'value added' from cheap supplies from poor countries. UK FDI data suggest that most productive UK FDI is located in rich countries, but these are regional figures with little country breakdown, something that is omitted to secure individual company information, but which only adds to scepticism about what the data actually reflect. In any case, such data cannot take into account the benefits to major companies of their links with foreign suppliers that they dominate in so-called value-chains.

This is a complex topic that is hard to resolve with official statistics. However, insofar as the data represent anything, the following table is what they show: 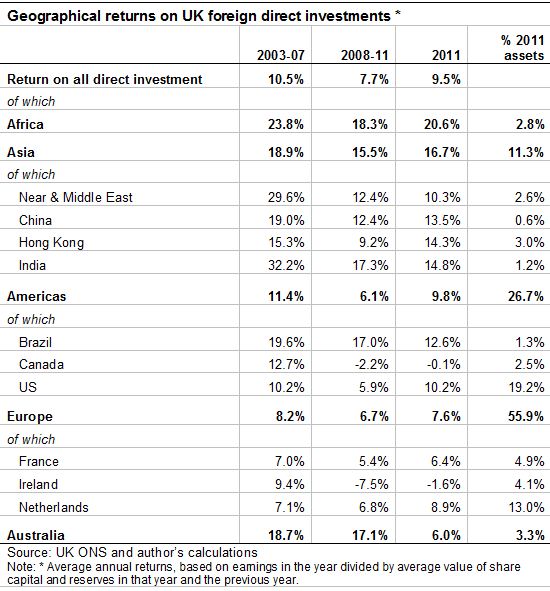 A Private Chat About Provoking a War

The following text cites a conversation between a prominent British imperial politician and an American diplomat in London, in 1910. It is an interesting example of what key players say when they feel free to speak their mind. This was before Wikileaks, after all ...

"As Germany's industrial and financial power as well as its trade increased, a growing antagonism between Germany and the British Empire arose. Everywhere the ambitious German industry confronted a British competitor avidly observing the growing danger to his monopolistic trade relations, jealously guarded until then. A 1910 conversation between Lord Balfour, leader of the British Conservative Party, and Henry White, then United States Ambassador in London, shows the contrast between the two European industrial powers, and the attitude of the British leadership:

Balfour: We are probably fools not to find a reason for declaring war on Germany before she builds too many ships and takes away our trade.

White: You are a very high-minded man in private life. How can you possibly contemplate anything so politically immoral as provoking a war against a harmless nation which has as good a right to a navy as you have? If you wish to compete with German trade, work harder.

Balfour: That would mean lowering our standard of living. Perhaps it would be simpler for us to have a war.

White: I am shocked that you of all men should enunciate such principles.

(This text is from Georg Franz-Willing, ‘The origins of the Second World War’, Journal of Historical Review, Vol 7, Number 1, Spring 1986, p 97. The Balfour-White conversation was taken from a biography of Henry White)