McKinsey Global Institute's latest report indicates how total global debt levels were still rising in 2017 (although they have been stable compared to GDP since 2014). There is a much worse trend for countries with FX debt and whose exchange rates have dropped, since the burden of every $1m borrowed will have increased. Interest rates on this debt are no longer at the extremely low levels where they had been held for years by central bank policies.
The US Federal reserve has been tightening policy, raising interest rates modestly, and some other major central banks are following suit, based on their view that some kind of economic recovery is under way. But the persistent high levels of debt show the fragility of that recovery. 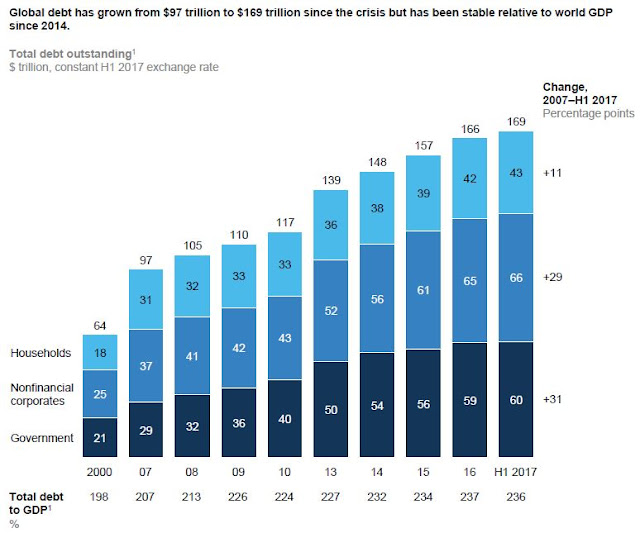 Source: McKinsey Global Institute, June 2018
After the rapid accumulation of debt in the early 2000s, little of that debt was written off in the acute phase of the crisis from 2008 as central banks stepped in to salvage not just the financial system but the economy in general. So there remains a chronic and high debt burden, held by governments, households and corporations. In recent years, debt has risen most in ‘developing’ countries, whereas it has tended to be reduced somewhat or stabilise in richer countries (see here for a review I did in September 2016).
The key equation remains:
Higher interest rates + Higher debt = Repayment trouble!
There are lots of visible problems in the imperialist world economy, from Trump’s trade war, to the rivalries in the Middle East and elsewhere. This debt problem is one less evident, but one that is more pervasive.