The reality of a global economy is shown by close connections in trade and investment, and is reflected in similar trends that affect many key countries. One of these trends is the rise in debt held by governments, households and corporations, as borrowing grew to provide the funds to maintain economic activity. After the acute phase of the economic setbacks in 2007-08, the world is now in the chronic phase of stagnant growth. Occasional blips higher look good, and the patient goes for a walk, but the economy is never far from stumbling back into a ditch.

There are individual deviations from the average picture, but each country's details express the evolution of a world economy. Even though one country may be impacted less, or more, that deviation usually reflects its position in the hierarchy of world economic power. Higher debt levels, or ratios of debt to GDP, are common among the richer countries, especially those that have a privileged position in world finance. After all, they can raise funds from the world market fairly easily since they are the guys in charge and, in the market's 'wisdom', are likely to remain so. Poorer countries have what is called a 'less developed' financial system and tend to hold less debt, at least in relation to the size of their economies. This general point is borne out by the data on debt/GDP for those the Bank for International Settlements considers the 'advanced' versus the 'emerging' countries, as shown in the next chart for the period 2000-2015: 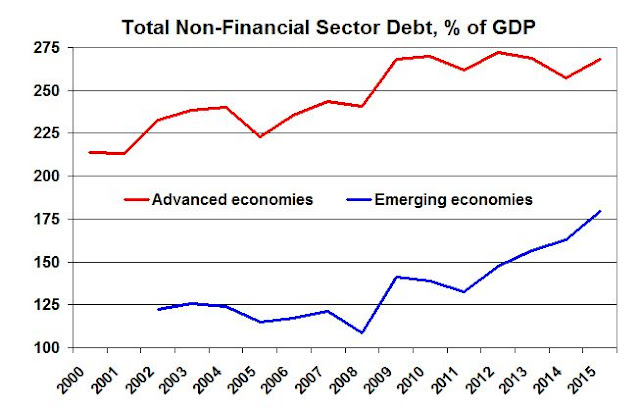 Two features of the previous chart stand out: first, the much higher debt ratios for rich countries, but, second, the faster rate of growth of debt in the poorer countries in recent years. This reflects how much more the poorer countries attempted, from a lower base, to keep their economies ticking over in the wake of the acute phase of the crisis by accumulating more debt.

Country details bring out some other points. First, here is the chart of the total financial sector debt for some key emerging market countries, to add to that already given in a blog post a few days ago for the major advanced countries: 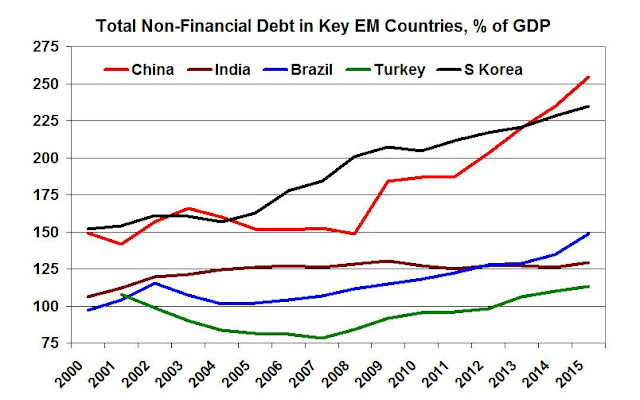 Clearly, China and South Korea have had the biggest growth of debt in the past 15 years, and have the highest ratios of the main 'emerging market' countries. China's rise in debt has been most dramatic after 2008, but, as a later chart will show, this has principally been on the back of the extra debt burden taken on by non-financial corporations (both private and state-owned).

This China development is similar to the results for many EM countries. It contrasts with the picture for advanced countries, where the extra debt has been mainly held by the government sector. This reflects the ability of the major states to borrow and alleviate the burden of the crisis in the corporate and household sectors via government liabilities (debt), while the emerging market countries and their governments, with less access to world markets, are far less able to do so. The breakdown of EM debt in BIS data only goes back a few years, compared to the longer time series for advanced countries, but the next two (different) charts below indicate what has happened: 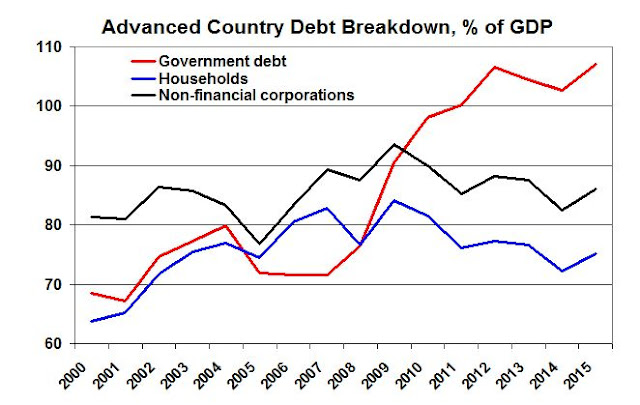 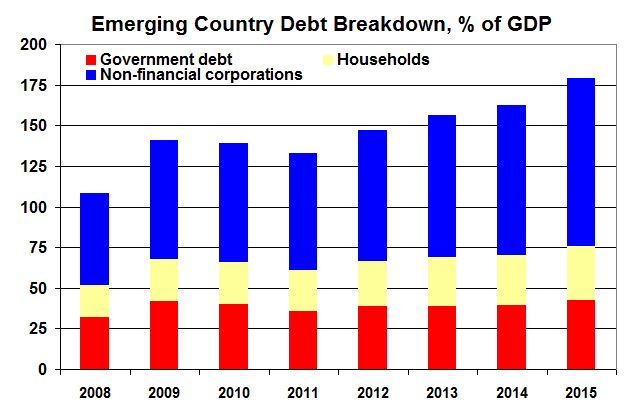 Now to some country pictures for the breakdown of debt, starting with the major powers. Every picture tells a story, so my comments will be brief. Take care to note the y-axis scale in each chart. A taller bar in one chart compared to another chart does not necessarily mean that the debt ratio is higher.

The US: total debt has stabilised around 250% of GDP. Government debt has doubled to 100% of GDP, but household and corporate debt ratios have declined. As mentioned in an earlier blog post, these data ignore the US Federal Reserve's 'assets' in the form of mortgage securities that they have bought. Also, the data only cover 'non-financial' sector debt, so exclude many other liabilities of the financial sector, not least pension funds. 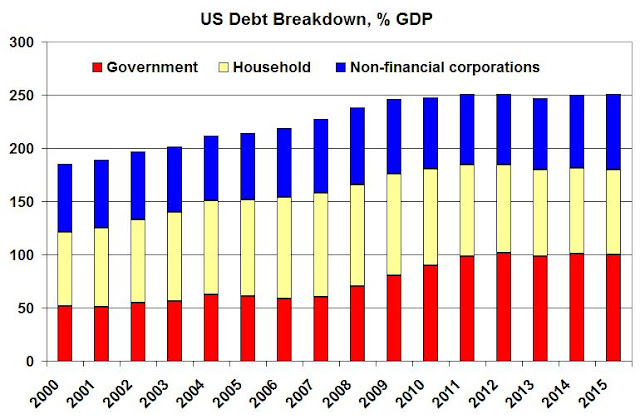 The UK: similarly, the UK has seen household and corporate debt shrink somewhat, while government debt ratios have also doubled to around 100%. Total non-financial sector debt in 2015 was a touch lower than in 2012, at 266% compared to 277% of GDP, but again, this ignores the many extra liabilities of the Bank of England apart from other obligations. 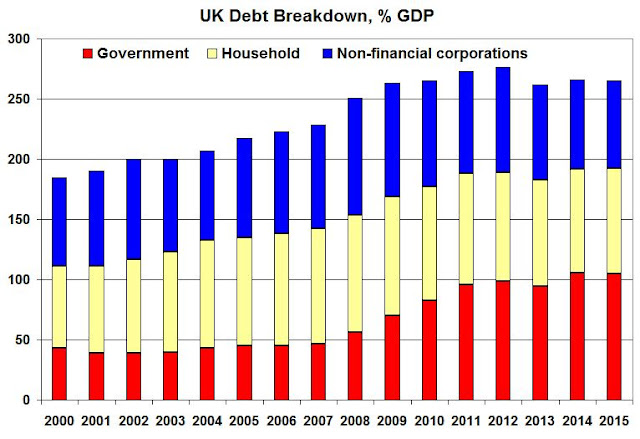 France: this country is in a worse debt position than the UK. The increase in government debt has been similar, but household debt, and especially corporate debt has risen further in recent years, rather than declining. The total debt ratio in 2014-15 was 290%. In the past five years, annual economic growth in France has been below 1% and often close to zero. This picture gives the backdrop for worries about French banks. 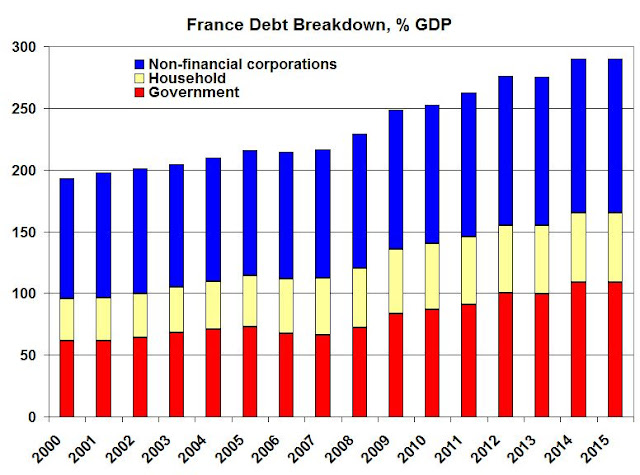 Italy: traditionally having a relatively high government debt ratio compared to other major countries, that debt grew still further after 2007. Total debt stabilised at close to 275% of GDP in 2014-15. Economic growth has been lower even than in France. 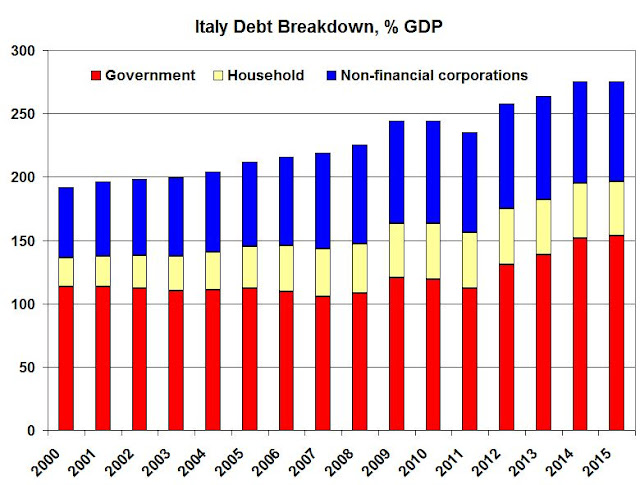 Spain: there has been a sharp rise in total debt since 2000, but some recent reduction. Corporate and household debt ratios have fallen in recent years, largely offset by a rise in government debt. In 2015, total debt was 283% of GDP. 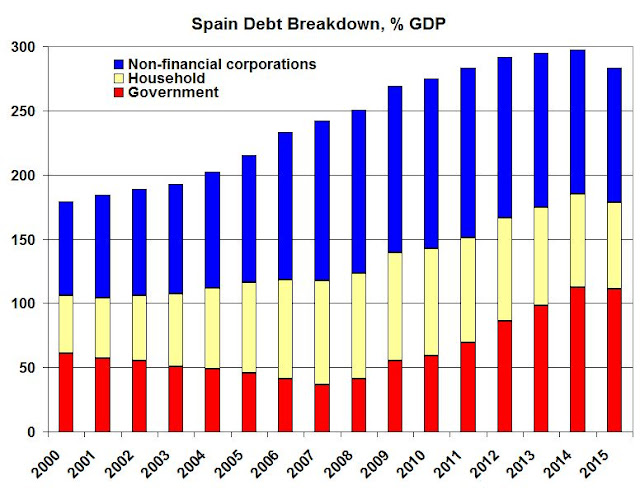 Germany: this is the outlier country, with a steady reduction of the total debt ratio in recent years, hitting 184% of GDP in 2015, and with the ratio staying below 200% even in the acute phase of the crisis. German annual economic growth has been weak, at less than 1% in recent years, but Germany's government debt ratios increased by much less than in most other major countries. This may be related to the liability that Germany takes on for the eurosystem via the Bundesbank, and this is not counted in the data here. 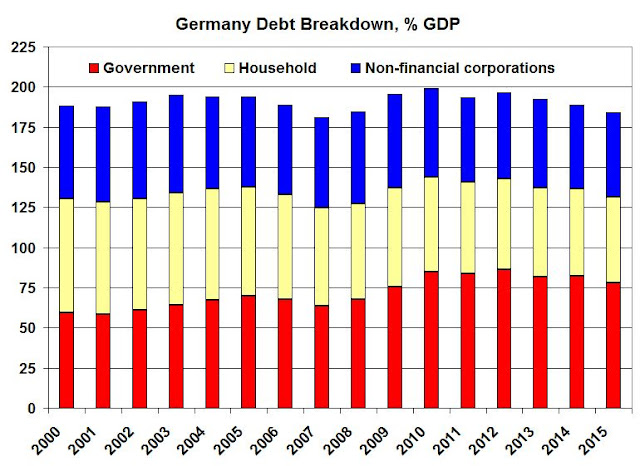 
Interesting emerging market countries from a debt perspective are China, South Korea and Brazil. The total debt picture for these was given in the second chart above.

China: historical details for China's debt data are patchy, so for 2000-2006 the following chart only gives the total and the government number (with the black bar indicating the difference). After being fairly stable from 2000 to 2008, China's total debt rose sharply, principally through the rapid debt accumulation of non-financial corporations, both state and private. Household debt has also risen, but not by much. In 2015, the total debt ratio was 255% of GDP, with corporate debt at 171%, up from 99% in 2008. This rapid debt accumulation has led to worries about bad loans, but against this one has to take into account some important mitigating factors. While corporate debt has risen rapidly, the average leverage of corporations is low. Furthermore, the government has an ability to allocate funds between different sectors in the case of emergency, apart from still holding more than $3 trillion in foreign exchange reserves. 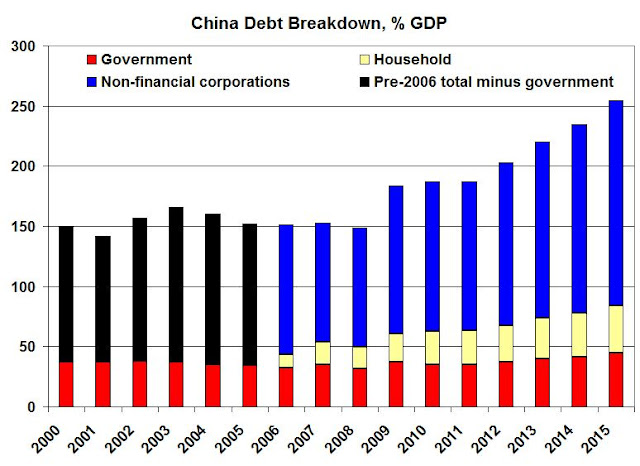 South Korea: there has been a steady rise in debt ratios for all three non-financial sectors from 2000 to 2015. In 2015, total debt was 235% of GDP, which nevertheless remains well below the figure for most of the major countries shown above. 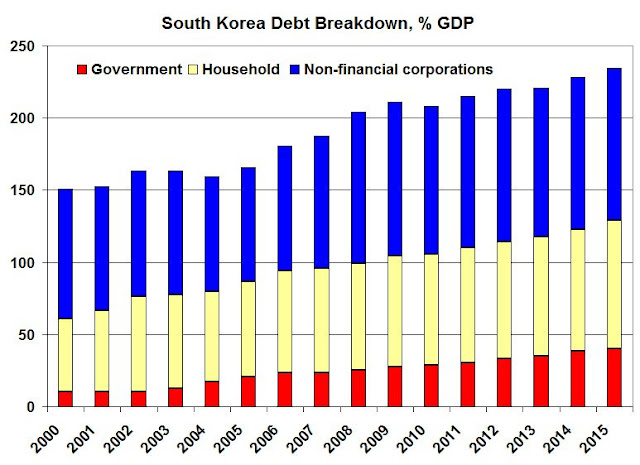 Brazil: the debt picture for Brazil would seem to belie the crisis the country faces. Total debt rose from close to 100% of GDP in the early 2000s to 149% in 2015, but not by much in the scheme of things, and to a level that remained below all the other countries shown, even below Germany's debt ratio. As in China, Brazil's debt ratio only started rising after 2008. This indicates that the debt ratio is far from giving a full summary of economic conditions. Brazil's economy has been in decline for several years, hit by weaker commodity prices and a slowing of world trade. Government debt started at a relatively high level, but has hardly changed. The increases in household and non-financial corporate debt has accounted for the rise in the total. 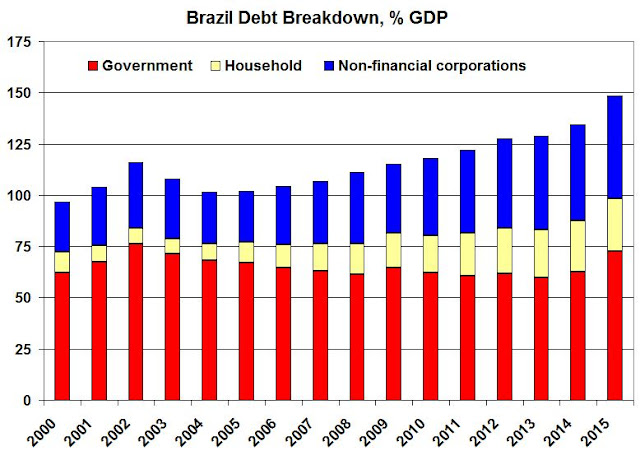 If you were wondering why interest rates remain at very low levels, with central bank rates negative in Japan and in many European countries, the debt burden is the clearest answer. Huge debts have been accumulated in most key countries in response to the crisis. Now they stand as a mountain of liabilities, payments on which can only be serviced - and defaults avoided - if interest rates remain low. Higher levels of interest rates would threaten to collapse the edifice that has been erected to shore up the world economy.

Could you expand a bit on the relationship on debt and interest rate for the major capitalist countries? I don´t fully understand the last paragraph. Thank you, I have started following some of your writing this yar and it´s pretty interesting.
Manuel from Argentina

Reply to Manuel: The final paragraph was perhaps a bit too much of a summary statement! Here is an elaboration:

1. Note two points: (a) the interest rate paid, whether fixed over the whole period of the loan or bond issue, or floating, eg according to 6m LIBOR every six months; (b) the repayment of principal, whether spread over the whole period of the loan, eg in equal annual instalments, or paid all at the end, as is usual for bonds. I will ignore (b) because this is not affected by interest rate changes.

3. In the major countries, debt has risen over the past 15 years (except in Germany, maybe one or two others). The total debt will generally have a lower average interest rate now than it had five or ten years ago, as the mix of debt is made up from a higher proportion of newer bonds and loans with the lower rates, helped by the interest rate falls of the past years. The falls in interest rates have been especially pronounced for government debt, but have also occurred for corporate and household debt.

4. Interest rates are close to zero in most major countries, and minus in some countries for government debt (and a recent example of a negative corporate bond yield!). But rates are rising a little now in the US (5-year US Treasuries up 20bp in yield from lows in the past two months). This could cause problems if the rise persists, because it is also likely to spread elsewhere to some degree.

5. Debt levels remain high, and low economic growth rates also make the debt less easy to pay back with corporate revenues, personal incomes of households or the revenues of governments. This is another factor separate from interest rates. However, if interest rates rise, then so will servicing costs over time. Together, stagnant growth and higher servicing costs would drive potential debt defaults higher.