Financial debts are obligations to pay back the creditor. This may not happen, either because the debt is 'forgiven' (rarely) or because it otherwise gets written off in a deal to restructure future payment obligations in a way that looks more plausible to the creditors, who may be banks, insurance companies, pension funds or other private sector asset managers, or another government or public sector organisation. For the major powers, being in such a situation is a little tricky. They are meant to be on the disciplining, creditor end of the balance, even if they also happen to be in a lot of debt themselves. However, a recent set of data from the Bank for International Settlements indicates that, despite the much-vaunted recovery of the world economy from its acute crisis phase, debt ratios to GDP have generally gone up in recent years in the key countries. Even where the debt ratio appears to have fallen a bit, this hides a wide range of other, not-counted obligations (implicit debts) that may be hidden off budget, or are deep in the details of the relevant central bank accounts.

The following chart for five key countries shows the picture for the 2000-2015 period. Japan remains an outlier, with far and away the highest debt ratio of 388% of GDP in 2015. Having had such a long deflationary depression, even an earthquake and tsunami leading to dreadful nuclear radiation fallout from the Fukushima plant could not induce the comatose economy (and political class) to wake up.  The UK looks in a slightly better position, although its recent lower debt ratio ignores the run up of Bank of England liabilities, plus many other off-budget items. The US debt ratio has stabilised in the past five years or so, but this has been despite the supposed recovery of the economy, and also ignores the post-2008 accumulation of Federal Reserve 'assets', including nearly two trillion dollars of mortgage securities bought from banks. France's debt ratio has continued to rise. Germany's has fallen, helped by the stronger economy. But the latter calculation ignores the liability of Germany, at the heart of the eurosystem's finances, where endless volumes of dodgy 'assets' have been accumulated by the European Central Bank, whose main shareholder is the German state.

So, following my usual caveats about what data really cover and what is ignored, here is a chart of how the total debt ratio of the non-financial sector (including governments, households and non-financial companies) in five countries has developed in the past fifteen years: 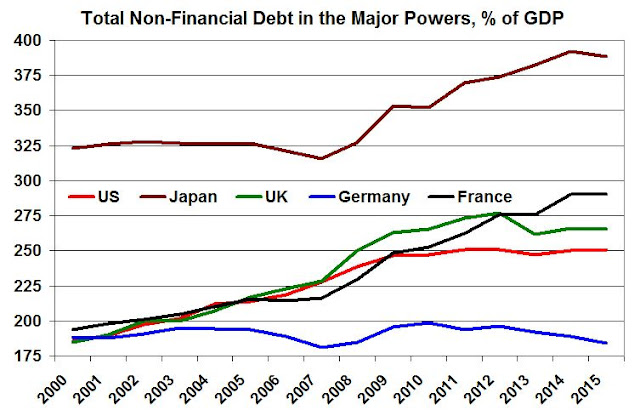