Those who like international comparisons that highlight the shift in global power will be interested in the following table. It is from research by Paul Kellogg, University of Toronto, published in 2015, and shows the geographical breakdown of the 2,000 largest public corporations, ie those whose shares are quoted on stockmarkets.

There is a striking decline of the US, Europe and Japan over this period, countered by a rise of the BRICS countries, but mainly China. To some extent, China's data will also have been boosted by the stockmarket bubble in 2014, which burst in 2015. But the underlying trend is nevertheless clear, and China's stockmarket in 2016 has since recovered to and beyond 2014 levels. As Kellogg puts it: 'In 2004 there were just 50 corporations from China on the full list of 2,000 (25 of which in Hong Kong). By 2010, the Hong Kong total had jumped to 49, the total in all of China to 162. In 2014 the Hong Kong total stood at 58, the total for all China at 207.' 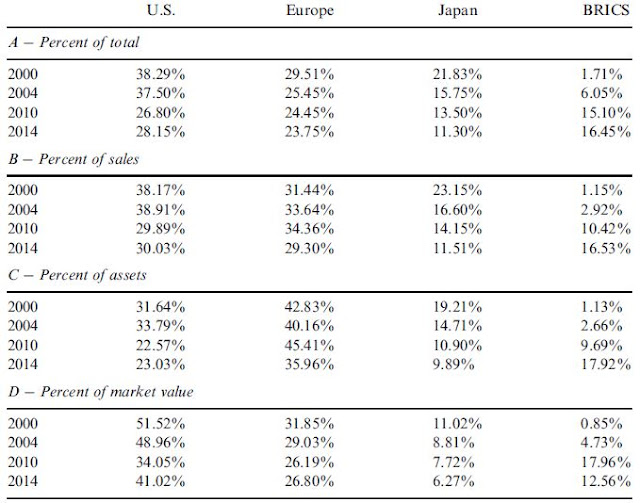 My only quibble with the table is that he would have better shown only one decimal place in the numbers!