Lenin was fond of the English saying: ‘Facts are stubborn things’. The accuracy of many so-called facts may be disputable, but it can be instructive to report on the facts published by official institutions of imperialism, ones that nevertheless throw a not very flattering light on today’s realities. This article is a complement to the ‘Imperialism by Numbers’ article I published on this blog on 1 May. It is also an update to, and an extension of, some data I reported in ‘What the “China Price” Really Means’, published on 4 June last year.


The first set of facts is shown in Chart 1. These are data that cover average hourly compensation costs, where ‘compensation’ means not only wages paid, but also the additional employer payments for social benefits such as unemployment insurance, medical insurance, and old-age pensions. The source is the US Bureau of Labor Statistics (BLS), which carried out this analysis to calculate for US corporations the total costs of employing workers in a range of different countries. The details show that it is not only wages paid that are higher in the richer countries; employee benefit costs are much higher too. Chart 1 gives index numbers based on 100 equalling $34.74, the BLS figure for the average hourly compensation paid to US manufacturing workers in 2010. Countries’ labour costs are shown as bigger or smaller bars, with the height of each bar proportional to the 100 level compensation cost in the US.


For China, average hourly compensation costs are estimated at $1.65. This was less than 5% of the costs of US manufacturing employees in the same year! Several years earlier, China’s figure was closer to 2% of US costs, but recent sharp wage rises in China have narrowed the gap a little. India and Sri Lanka have a still smaller ratio of US compensation costs, near 4% and 2%, respectively. Labour compensation costs are higher in the Philippines and Mexico, but Poland is the first country from the low end of the chart that has compensation costs that are more than 20% of the US level.


By contrast, the US, Canada, Japan and the rich Europeans tower above all the other countries shown in the chart. This group includes the so-called G7 countries, the major powers still running the world economy. Switzerland, Belgium, Germany and France have compensation levels more than 20% higher than in the US. One factor influencing the country ranking is the value of a national currency in the international market. However, the gap between the top ranked countries and the bottom ranked ones is so large that this currency factor has little influence on the overall distribution.


Surprisingly, the BLS’s data do not include any African country. Perhaps this is a problem of getting comparable statistics. For example, this is the reason that the BLS does not include figures for China and India in its standard country comparison reports, though it gives some information separately. However, Africa has also been a less important continent for US economic expansion overseas than elsewhere, and the BLS data focus far more on Europe, Asia and Latin America.


Sources and notes: US BLS. 2010 estimates based on 2007-08 BLS data are made by the author for China, India and Sri Lanka. Note that 2-letter ISO codes are used as country identifiers, and that CH refers to Switzerland, not China (which is CN).

Even the relatively minuscule labour costs for the poorer countries exaggerate the actual earnings of millions of workers. The Indian data are boosted by including only the so-called ‘formal sector’, that is the sector made up of generally larger, more organised companies that have some form of regulation and government supervision – including being included in statistical surveys! By contrast, the ‘informal sector’ is unorganised, on a much smaller scale and may include a family ‘business’ that consists of the parents, children and dependent relatives. This sector is not included in most data surveys, but it accounts for a large share of employment at much lower wages than in the formal sector. The BLS reports that 80% of India’s manufacturing employment is in the informal sector.


For China, the BLS calculations of hourly compensation do include estimates for the ‘informal sector’. In Chinese statistics this is listed under the heading of ‘town and village enterprises’ (TVEs), whereas the larger, more regulated, sector is under the heading of ‘urban enterprises’. The TVEs accounted for 70% of the total workforce, with 79.1 million workers employed in 2006; the urban enterprises sector employed the other 30%, or 33.5 million workers. Not surprisingly, in 2008 the average hourly compensation was just 82 cents in the TVEs compared to $2.38 in the urban companies.[1]


American and other foreign corporations will tend to set up in the formal sector, and will likely be paying the ‘higher’ wages. But they will still benefit from the mass of even cheaper labour from poor families who work for them indirectly, either by providing services for the larger companies, or by being what Marx called the ‘reserve army of labour’ for the formal sector. The divergence in labour costs for countries other than China, India and Sri Lanka may be less extreme. For example, South Korean costs are just below half the US figure. But there is still a very big gap.


If we look at the broader economy, rather than just manufacturing, the same picture of relative incomes holds. In fact, there is a 95% positive correlation between the figures for manufacturing compensation and for a country’s per capita GDP.[2]


Chart 2 gives a snapshot of global income inequality, based on a rough estimate of the Lorenz curve for 183 countries comprising 6.7 billion people.[3] World Bank average GDP per capita data for each country are used as the input. This method may understate global income inequality, because it assumes that everyone in country A gets the average per capita income for country A. Nevertheless, it has the advantage for our purposes of putting the different countries in focus. 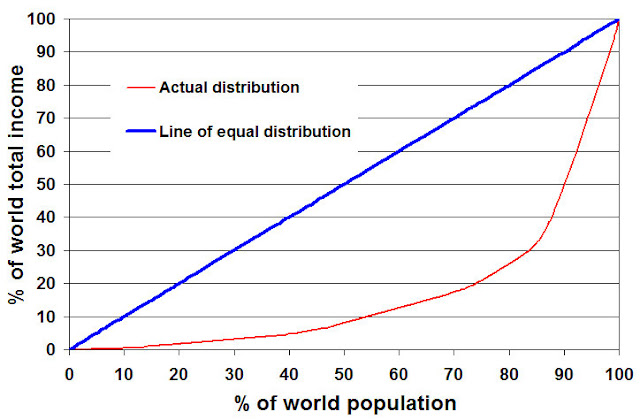 Source and notes: World Bank. Data for average GDP per capita in 2011 for 183 countries is used as the basis for calculating the cumulative income distribution curve, the Lorenz curve.

If we take a common measure of inequality, the Gini coefficient, and calculate this from the data in Chart 2, the figure shows the expected high level of inequality: close to 66%. It would be more like 70% if the inequality of component country distributions were also allowed for. In that case, this measure of income inequality on a global scale is on the same level as that in the most unequal of countries for which Gini coefficient data are available: Namibia.

To give specific examples, in 2011 the GDP per capita of Switzerland was put at just over $70,000, while the US number was around $47,000, Germany was $43,000 and the UK was $39,000. Compared to these figures, China was close to $4000 and India to $1300. The data from the World Bank, the IMF, the CIA and other organisations have some differences, and the figures get revised, but the rankings and the income gaps are very similar from all sources.


The basic, and not surprising, fact is that the world economy is very unequal. When we look at the mechanisms that underpin this fact, we find that the inequality has much less to do with differences in labour productivity than with the way that some countries get privileges in the world economy at the expense of others.


[1] See BLS Monthly Labor Review, April 2009. The data noted here are for 2006.
[2] Using the full set of BLS data for 34 countries’ compensation costs in 2010, I found there to be a 0.951 correlation coefficient with the respective countries’ per capita GDP in 2011 as reported by the IMF. This shows that the manufacturing wage/compensation is closely related to the broader economic income of the country. This is a sign that the richer, and usually imperialist, countries can afford to pay their production workers more. As the ‘China price’ article indicated, this has more to do with imperial power than being based on higher productivity.
[3] The Lorenz curve is closely associated with the ‘Gini coefficient’ of inequality mentioned later. It is a common, summary graphical measure of inequality. The 45-degree line indicates where 10% of the population gets 10% of the total income, 20% gets 20% of the total, etc. As such, it represents a line of equality of income in the population. The divergence of the Lorenz curve from this 45-degree line shows the extent of inequality. Wikipedia has a general explanation of this statistical measure and its relationship to the Gini coefficient.
Posted by Tony Norfield at 11:32 pm