Fibre optic submarine cables carry the vast bulk of Internet and other communications traffic between continents. If you - by which I mean your government - wanted to access the information flowing through these, then the location of the cables is important - relative to where your government has (military) bases or national jurisdiction.

It is striking that the bulk of the transatlantic cables go through the UK. As for the other continent-connecting ones that do not, these tend to go through places like Cyprus, the home of a British military base. Isn't it nice to know we are all 'connected' - probably at most just one or two junctions away, at least from GCHQ?

Take a look at the submarine cable map, of which a portion is shown below. The full world map is available from here - scroll in/out from this site (not from the image below) to get a smaller/bigger geographical picture, or from a different central location.

This is the physical infrastructure for Edward Snowden's story. 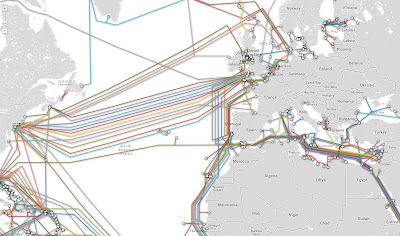 Conspiracy theories range from forcing data through satellite channels to the placement of monitoring devices at the cables themselves....