Robots and the Organic Composition of Capital

This week, London's Financial Times has decided to get back to what it is good at and report on some interesting economic developments: robots. The articles in this series promise to have much more value for those analysing the world than the FT's editorial line on Ukraine, Russia, Syria, Iran and other issues; opinions that simply reflect the discomfiture of the Anglo-American elite about things that are moving outside their control.
Robotisation of manufacturing processes has been under way for many years, but it seems to have accelerated recently. In the case of Foxconn, already reported on this blog, one pressure for robot innovation was the rise in wages among assembly line workers. However, in an effort to cut costs a number of production processes require not only a speed and accuracy that manual labour cannot achieve, but also a physical scale of operations that only robots can manage. Try carrying a 2.5 metre glass panel used for producing LCD displays that is only 0.5mm thick without breaking it. Or try to measure to an accuracy of 0.05mm. There is also a development in lightweight 'collaborative' robots that are used more directly by workers, and that are less likely to crush their human counterparts.
Here are some key points:
One implication of these developments is an increase in manufacturing productivity. Another is the increase in what Marx called the 'organic composition of capital': where there is not only a rise in the mass of machinery and raw materials compared to labour power employed, but also a rise in the value of such machinery and raw materials compared to the value of that labour power. The result in recent years has been evident for South Korea, as shown in the following chart, taken from a McKinsey Global Institute report. 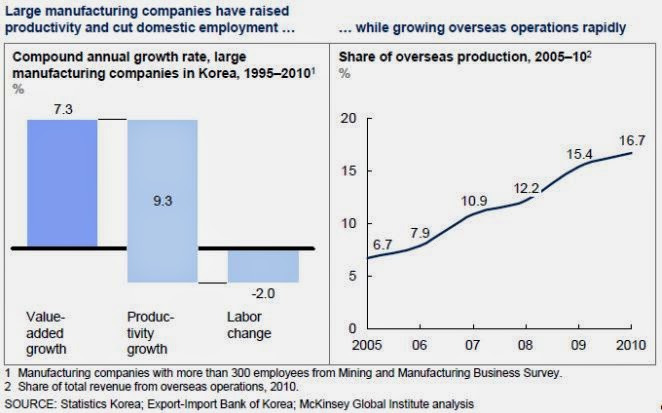 From 1995-2010, Korean output grew dramatically, at more than 7% per annum, but productivity grew still faster, at more than 9%, so that employment actually fell. Korean companies, like others, also shifted their operations overseas to take advantage of lower wages elsewhere.