Making Things Does Not Make You Smile

A pervasive economic euphemism is the 'value chain'. This neatly glides over what is meant by 'value' and simply notes, as far as statistics allow, how much each part of the initial development, production and marketing of the overall cycle takes of the final selling price of the good that is sold. The overwhelming lesson is this: to use fashionable parlance, absolutely the worst thing you could do, OMG, is to produce anything! How could you be so dumb? LOL!

What you need to do instead is to get poorly paid underlings to produce the goods. Then, assuming that you have any business sense, you take your cut from the branding, design or marketing of what the underlings have sweated over. If this simple lesson of modern international capitalist economics has escaped you, then let me present the 'Smiling Curve of Stan Shih', the founder of Acer, Taiwan's main IT company, as reproduced in an 8 June UNCTAD report: 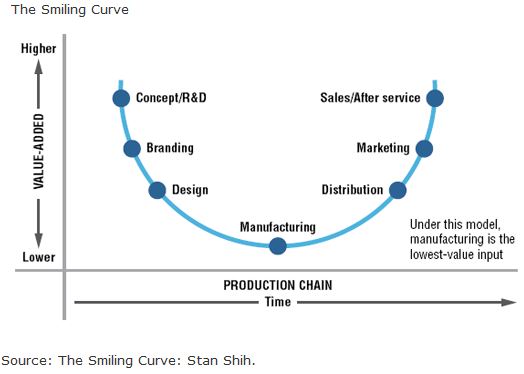 As Mr Shih illustrates, if you want to add 'value', forget about manufacturing, ie actually making the product. I have not read the original document, but it probably does no more than note a material fact of his experience, rather than explain that the world economy is dominated by major monopolies and other companies that can use their market power to decide who benefits from the labour of humanity, and who works on behalf of whom.

The curve may be smiling, but billions of workers are not. Just consider: an idea, concept and brand design that cannot be marketed because nobody made it. This does not seem to cross the mind of those who draw the curves, even if their lines reflect imperial reality