Equity markets have begun 2016 with the biggest falls on record, while the price of a barrel of oil dropped below $30. This is more than just a coincidence. The fall in oil prices results from, and also exacerbates, the continued malaise in the world economy
At first sight, lower oil prices should merely redistribute income from producers to consumers, via the lower of cost of energy, transport, etc. What is such a disaster about that, at least from the point of view of the world economy as a whole? One problem is the different concentration of the losses and gains: a small number of producers lose a lot, while many millions of consumers gain only a little. So news headlines report cancelled investment projects and job losses, rather than the motorist at the petrol station saving pennies on a litre of fuel. The negative impact on producers, especially on their investment, could well outweigh the demand that might result from consumers spending on other things. For example, many huge investments in shale production that looked viable when a barrel of oil was priced at $100 or above now look unprofitable – at least the loans given to these companies now look poorly backed by their prospects.
What is often overlooked, even by ‘Keynesian’ advocates of demand management, is that although consumer spending is bigger than investment in the economy, the swings in investment spending are much bigger than the percentage changes in consumption, and usually lead the up and down cycles of demand. Furthermore, what such analysts always overlook is that investment spending is basically driven by potential profitability. But this should not be a surprise in a capitalist economy!
More importantly, all this takes place in the context of continued, huge levels of debt compared to what the economy produces. There has been a sharp rise in debt levels versus GDP between 2007, ‘pre-crisis’, and 2014. This had occurred for almost all countries: poor countries such as China saw the sharpest rises in debt ratios; but rich countries saw a further increase from already elevated levels. This is the important context for the apparent reaction of equity markets to the fall in oil prices. The underlying problem is that debts cannot be paid back. It does not matter that the increase in debt in richer countries between 2007 and 2014 has largely been borne by the government, as the public sector took on private liabilities - all this means is that the pressure for austerity via cuts in government spending is all the greater. This casts doubt on the value of the full range of financial securities. Those securities linked to oil and gas prices now get hit directly because there is a clear focus of potential loss that is visible every second of the financial trading day. But the myriad of other equity securities issued by other financial, industrial and commercial companies get caught up in the downward vortex. This is not only because money capitalists work on the basis of what looks like giving the most attractive yield, so a fall in energy-related security prices has a knock on effect on other, non-energy-related securities too. More troubling is that there is clearly a broader problem affecting the whole economy.
This problem of debt and insufficient incentive to boost production overwhelms the otherwise mixed, plus and minus economic outcome (mainly plus) that follows from lower oil prices. In the oil market, refiners will be making more profit as the cost of their feedstock falls with lower crude oil prices faster than will their output prices of refined products. To some extent, this will insulate the integrated oil corporations from the downturn. Airline and other travel companies will also benefit from lower energy costs. So will China and Japan, major consumers of oil, although their energy companies will suffer. Nevertheless, governments, from Russia, Iran and Venezuela to Saudi Arabia, Norway and the UK will find their oil and gas tax revenues falling. This has already led Saudi Arabia to make very sharp cutbacks in its public spending to reduce a dramatically high deficit, while other countries have seen a drop in their currency exchange rates. 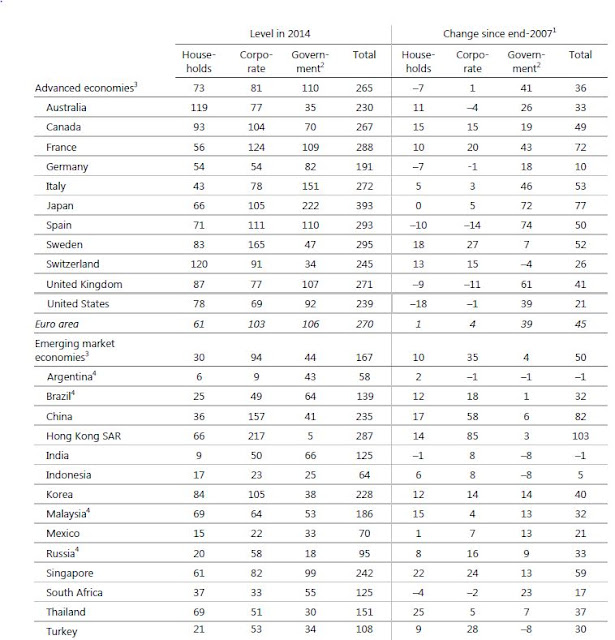 
All of this might simply be a series of local difficulties offset by positive developments elsewhere. But, in the absence of any momentum to support profitable capitalist investment elsewhere, it results in continued capitalist stagnation and the promise of yet more government measures to prevent a collapse of their system.