With the close of the Rio Olympics, I was surprised to note a pretty close correlation between the ranking of countries who won gold medals in Brazil with ... the power ranking of the respective countries in the world economy! The data are taken from the official Olympic data and from an index that was updated for my new book, The City: London and the Global Power of Finance.

My book gives a chart derived from 2013-14 data for the top 20 countries for their GDP, FDI, global use of their currencies, their military spending and prominence in international banking. The rank is determined by the score that each country has under each of the five measures. It gives a score of 20 for each country in which it is top, and if one country is half the level of the top country, then it gets a score of 10, and so forth. Below is a cut down version of the chart showing the top 10 countries in the ranking: 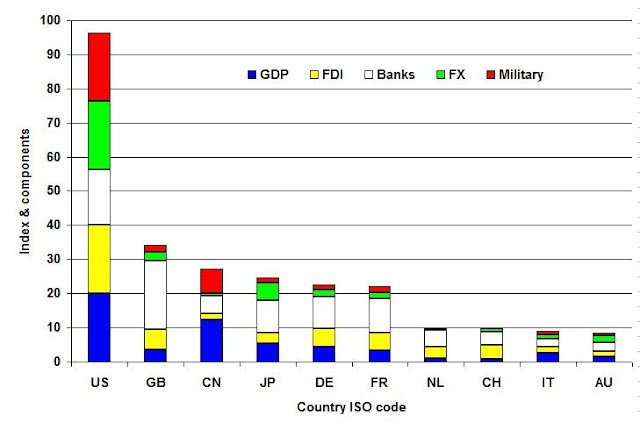 Countries are listed by their two-letter ISO code, so that GB is the UK, CN is China and DE is Germany, for example. In recent years, China has risen in the rankings, based upon its GDP growth and other measures. The US, not surprisingly, is top overall, although it is second to the UK in terms of international banking. In the power chart, the order of the top three is: US, UK and China.

For the Top 10, this power ranking picture is very close to the Olympic gold medal results! To standardise the two pictures, I have made the US gold medal score (the highest at 46) equal 100, while the UK's at 27, in second position, is then equal to 59 (being 59% of 46), and so forth. The outcome for the top 10 gold medal-winning countries is below: 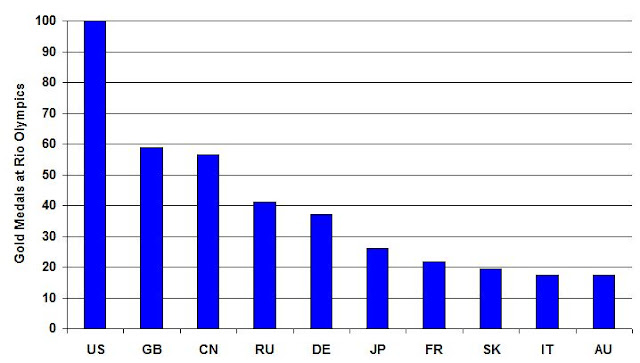 Compared to the power ranking, South Korea (SK) and Russia (RU) make it into the Top 10 for gold medals, while the Netherlands (NL) and Switzerland (CH) do not. But the top three are the same, and in the same order, in both rankings. Germany, France, Japan and Australia also make a showing in both Top 10 rankings. South Korea makes it into the gold medal ranking, but not the power ranking top rank.

It looks like having an ability to be first in an Olympic event has a close relationship to a country's position in the world economy, at least for the top countries in each ranking.

One aside on the UK is that there has been a ruthless 'medals mean money' approach to granting money to Olympic sports. In unashamed state planning, the UK's National Lottery has done much of the funding on this basis. This diverts money from the regular subscriptions of the masses betting each week, and their need for entertainment, into a national success story. As one might expect, this is principally enjoyed by the privileged classes, exemplified by the funds available for 'horse dancing', otherwise known as dressage.