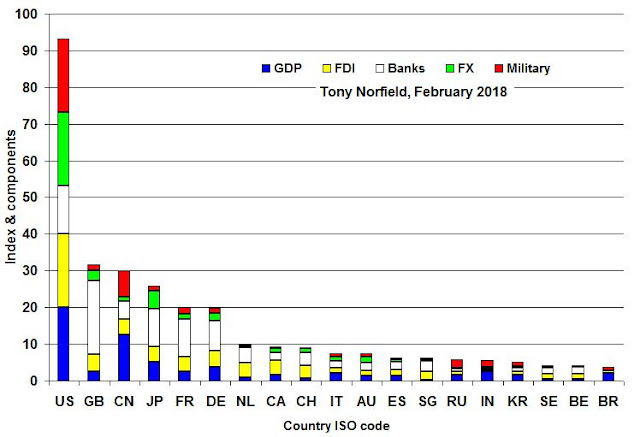 Tony Norfield, 12 February 2018
[1] See here for one of the early versions, and Chapter 5, ‘The World Hierarchy’, of The City: London and the Global Power of Finance, Verso 2016 and 2017, for a fuller explanation.
[2] Data for Hong Kong and China should be combined, since they are one country. However, there are difficulties. For example, this can easily be done for GDP, but in the case of FDI, most of Hong Kong’s is in China. So I have included only China’s FDI (most of which I believe is outside Hong Kong). In the China data shown, I have added Hong Kong only for GDP and FX. Banking is taken as the average of the two; FDI and military spending is China only. The resulting index number will probably slightly understate China’s importance.
Posted by Tony Norfield at 10:35 am