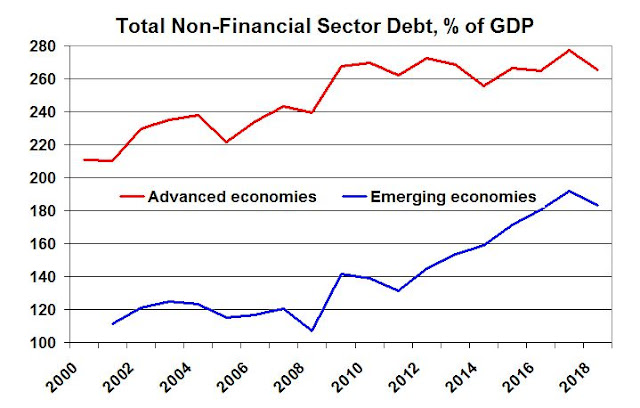 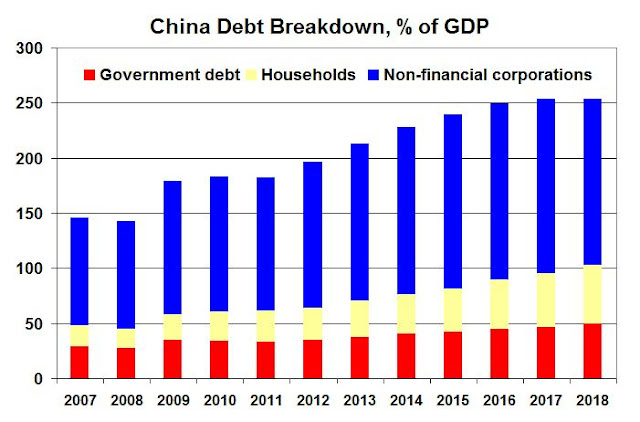 Posted by Tony Norfield at 5:40 pm

You havent clarified anywhere whether the debt numbers before the china graph are government or non government.

Anonymous: the 250% number for China is total debt, while the 50% number is government debt. These numbers represent credits to the non-financial sector of the economy. That should have been clear enough from the text, and the chart shows this too, with the red bar at 50% and the total at 250% in 2018.

... sorry, if you only mean the data before the China graph, these are total debt data, ie all credit to the non-financial sectors of the economy (govt + households + non-financial corporations).

These numbers can be obtained from any web-site related to this issue. I think you must go one step further and explain what are the conclusions to be drawn from this situation.

Mehmet Ince: This was a brief update on the debt numbers. There is little to add to the comments I have made before on this issue. What 'conclusions' would you draw?

Well, you are the expert on this. But I think the fact the the high debt ratio and flat profitibility rates of the US firms since 2012, the slowing growth rate of China, cronic low growth rates in Europe and Japan coincided shows that the next crisis will be much stronger, that the governments will have less arsenal to cope with it. Of course this will have dire political implications.

Reply to Mehmet Ince: The reason I have paid attention to the level of debt in the past few years is that it is the most direct indication of chronic nature of the crisis. The acute phase has gone (in 2008-10 for many countries), but the debt ratios show that huge liabilities still remain.

These liabilities are also the assets of banks and, directly or indirectly, of insurance companies, pension funds, etc, too. This mountain of debt lays claim to value produced in the world economy but those obligations cannot be met. Policy makers in the major countries have tried to ward off the problems with continued low interest rates, to make the debt serviceable, and there have also been some debt write offs. But I agree with your comments that this now leaves central banks and governments with fewer policy bullets.

Who knows what shape the next crisis will take? My view is that an abrupt, sharp recession like in 2008 is unlikely. Banks are in a stronger position now and have improved capital ratios, so a repeat of the rapid, panic contagion seen then is not probable. But this still points to an extended period of chronic economic malaise, one that will produce more reactionary politics in many richer countries.

My view of the latter political developments is given in a book review: https://economicsofimperialism.blogspot.com/2018/12/liberals-populist-right-politics-of.html