Following are slides for my presentation on a panel at ‘The World Transformed’ conference in Brighton on Monday 23 September. It was well-attended, with probably some 400-500 people under the ‘Big Tent’, some out in the rain. The topic was ‘financialisation’, a term that I find misleading at best. Those who use this term often do not understand the role financial markets play, and often it is a cloak for their soppy reformist policies. So I decided to switch the focus to imperialism and finance instead, and to expose UK Labour Party hypocrisy.
I had fifteen minutes, as did the other panel speakers, Yanis Varoufakis, Ann Pettifor and Kali Akuno. My presentation was marred by the lack of a promised presentation screen. It led to me fumbling a little over my notes instead, but I should have realised that this absence was close to inevitable. There was a good reception for what I said, but most acclaim, unsurprisingly at this Labour Conference-related event, was given to the ‘Oh, Jeremy Corbyn!’ angle taken by Varoufakis and Pettifor.
The Q&A period enabled me to develop points on the hypocrisy of the Labour Party’s reliance on the rest of the world for a living and its support for Britain’s imperial status – illustrated with reference to how the 1945 Labour government funded the introduction of the welfare state (see here for details). 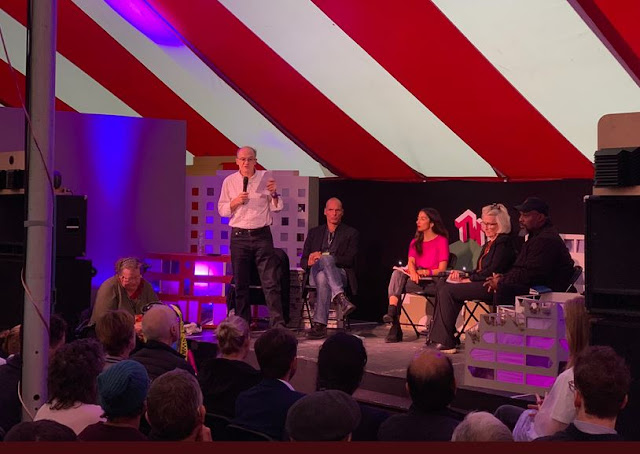 And so, to the slides below … 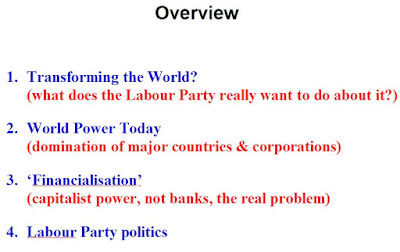 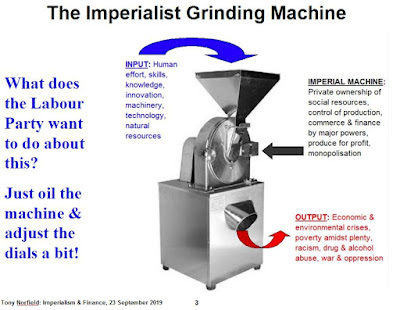 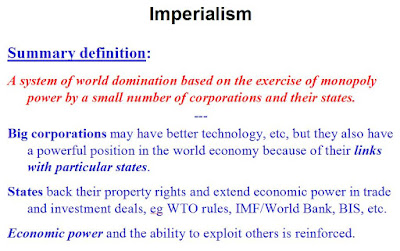 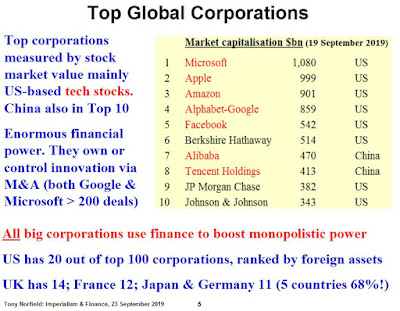 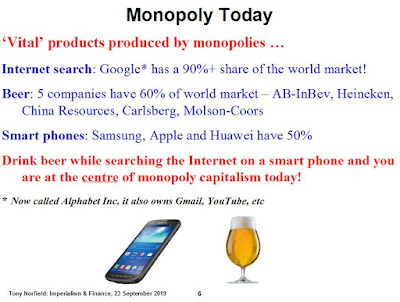 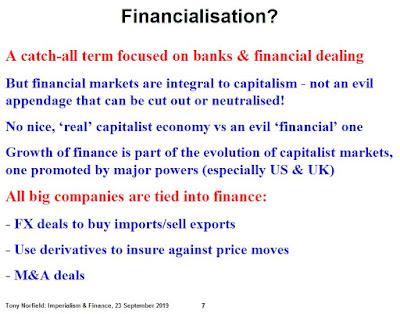 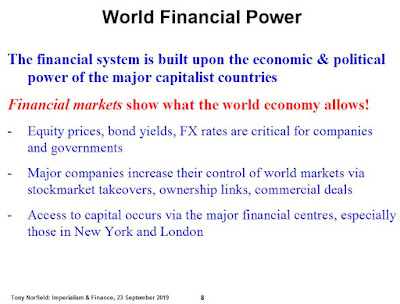 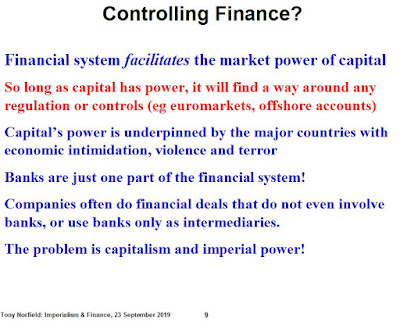 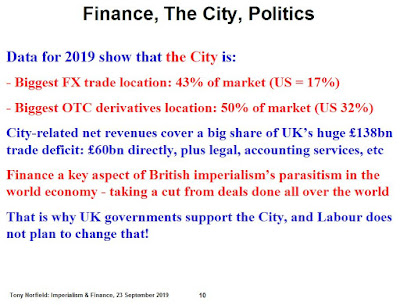 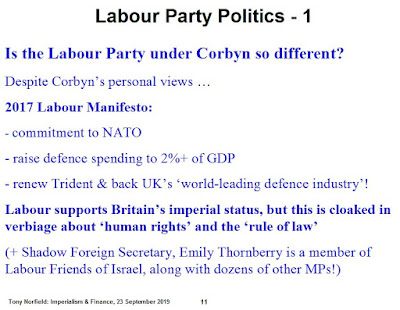 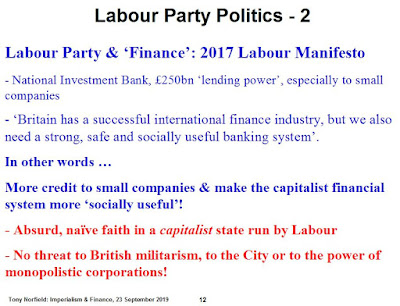 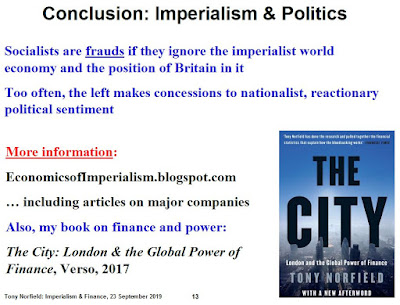 Posted by Tony Norfield at 3:11 pm

Nice one, Tony! I don't know the views of Kali Akuno, but to see you alongside Varoufakis and Pettifor on the fringe of the Labour Party conference is to see a cat among pigeons! I'm sure your readers around the world would be fascinated to know how your arguments went down with panelists and audience...

I don't expect Keynesians to offer substantial critical insights into the dynamics of capitalism in Britain or elsewhere. But it has been striking how a number of Marxists have collapsed into supporting Corbyn's left-labourism (e.g. calling for part of the Treasury to be re-located to the North of England in the naive belief this will somehow solve regional inequality!).

I suppose each generation has to learn the limits to labourism for itself. Pointing to the failures of the Atlee/Wilson/Callaghan governments doesn't seem to shake their faith that a Corbyn government will constitute a meaningful step toward socialism.

Reply to John Smith & Mike (Anonymous):
There was not much response to my actual arguments, just some shock, if that is not too strong a word, that I dared raise the question of imperialism and the nature of the Labour Party at such a pro-Corbyn meeting. The following comments are from my notes of the discussion.

Varoufakis tried to dismiss my points on how capitalism didn’t work by saying that we all had to give up on the idea of ‘revolution’. He then gave a rambling example about how a 50p ticket fee paid online apparently goes through many borders and tax havens, as his contribution to understanding ‘financialisation’. He also blamed the breakdown of the world financial system in the early 1970s on President Nixon! But, as I indicated, the thrust of his comments were ‘Oh, Jeremy Corbyn!’ – also stopping the evils of Brussels and Boris Johnson as the first steps to emancipation. He backed the idea of £1 trillion (I think it was trillion!) in state bonds to boost investment in Labour’s National Investment Bank proposal.

Pettifor wanted to claim she was against imperialism because she was from South Africa, a non sequitur if ever I heard one. She gave an odd disquisition on Germany’s finances in the 1920s, the complexity of the financial machine and ‘shadow banking’. Her conclusion was to end the control of markets over the economy and to promote public ownership. But the bemusement of the audience at much of this was changed into enthusiasm when she, like Varoufakis, went into ‘Oh, Jeremy Corbyn!’ mode.

Kali Akuno made interesting points on how socialists needed to learn more and think more about how to run society in order to get real change and draw people in. He gave examples from municipal projects in his area. Against Pettifor, he said that the supposedly wonderful New Deal of Roosevelt in the 1930s did not cover blacks in the US! He commended me for pointing out that Britain’s imperial exploitation of colonies helped to fund welfare spending in the UK.

I was glad I went first in the presentations, since trying to cover the junk said by Pettifor and Varoufakis would have taken much longer than 15 minutes. I had the advantage of tilting the discussion agenda away from nonsense ‘alternative strategies’ and to put a focus on how the world actually works - and the importance of being against the capitalist state, particularly against nationalism in an imperialist state like Britain.