What role does race play in US presidential elections? It may not be the decisive factor, but it is one that has an important influence. Just look at Trump’s continued pandering to his core, white working class vote. This question can be examined by looking at race and unemployment.
Economics is often seen as the key to winning elections. If the economy is doing well, then the incumbent party usually expects to prevail; if not, then it risks losing. Of course, a statistic like GDP might be on the up, but if you have lost your job, then you are not likely to feel good about that. A more relevant economic number for elections is the unemployment rate, and that is the focus of this piece.
Some 70% of the US population is white, while around 13% is black, and the US keeps records of the unemployment by racial identity. As everyone should know, given the many decades of segregation and discrimination after the period of slavery, blacks are in a generally worse economic situation than whites. This is very clear in their relative unemployment rates.[1]

US Unemployment Rates in Black & White 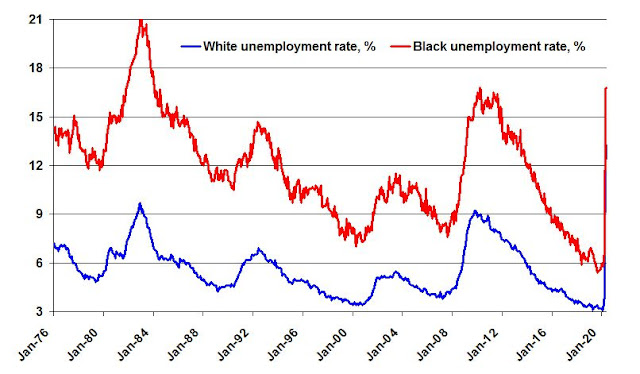 The chart indicates that when recession hits and unemployment rises for whites, it rises much more for blacks. In fact, at all times black unemployment is higher, although the margin narrowed sharply from around eight percentage points in 2011 to around four percentage points by late 2016, and further, to just two points, by end-2019. In recent months, the COVID-19 crisis has seen both rates jump up in the US. The white unemployment rate rose to 14.2 in April 2020, then fell back to 12.4 in May. But the black rate soared to 16.7% in April and was higher still in May, at 16.8%.
Could the sharply narrowing margin of higher black unemployment to the end of 2016 have had an impact on Trump’s Presidential victory that year? The white unemployment rate hardly changed in 2016, and this might seem an odd thing to speculate upon. Yet, there is plenty of evidence that white racism gets fuelled when whites feel they are not getting as good an economic deal as blacks.
A recent book by Jonathan Metzl, Dying of Whiteness, highlights this very point. He shows how many poor whites are happy to vote for welfare cuts, even those that badly affect themselves, just to make sure that those they think do not deserve welfare payments – mainly blacks and hispanics – do not get them. So the relative improvement in the position of blacks in the labour market could have played a part in Trump’s success.
I do not claim that race or racial resentment can explain everything about US election outcomes. I am also aware that Trump did not get the most votes in 2016, and that he was just better at playing the Electoral College game than were the Democrats. Yet when the record of white and black unemployment rates is examined, interesting patterns emerge. 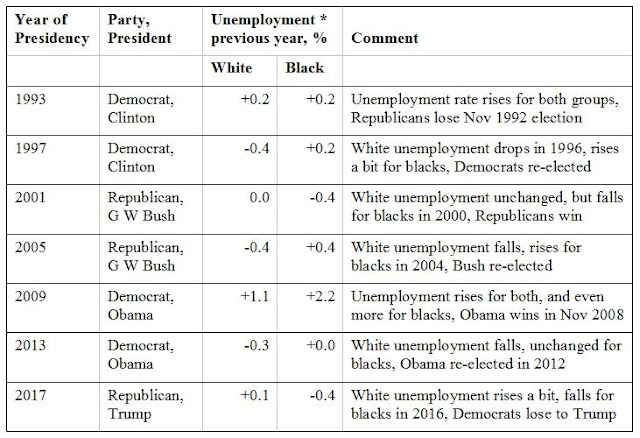 The previous table sets out details of changes in the unemployment rates for whites and blacks, together with any change in ruling party – Democrat or Republican – since Clinton first took office in January 1993. I assume that the relevant thing to look at is not the level of the unemployment rate, but whether it has gone up or down in the months leading up to the regular early November election time. Specifically, I look at the average unemployment rate for August, September and October, the months closest to the vote, and see how much that is higher or lower than the average for January, February and March of the same year. The averaging evens out any blip there might be for a single month. I do not allow for any other factors, such as wars, the perceived threats from other countries, moral panics, or the supposedly charismatic or particularly useless political leaders vying for the top job.
For the past seven presidential elections in the US, the table shows that:
a) White unemployment going up during election year means that the incumbent party loses the election. This is not surprising, given that whites are by far the majority of the electorate.
b) However, when the white unemployment rate was unchanged in 2000, the incumbent party, the Democrats, still lost. Notably, in that year the black unemployment rate went down. In 2000, white unemployment stayed very close to a low 3.5%, while black unemployment fell from 8.2% at the start of the year to 7.3% just ahead of the election.
c) Trump and the Republican Party was helped by these earlier trends in 2016, because both white unemployment rose a little and black unemployment fell. White unemployment was in a narrow range of 4.2% to 4.4% during 2016 and nothing exceptional, while black unemployment fell from 8.9% in March to a low of 8.0 in August.

The previous data support the idea of there being a racial dimension to US elections. That is not much of a revelation, for the US or for many other countries, but the evidence also suggests another angle which people are far less likely to have considered. A fall in black unemployment, with the associated improvement in black peoples’ livelihoods, seems to be a factor influencing white voters (the biggest electoral group) to protest about the incumbent party in government and either not to vote or to vote them out of office.
With the economic disruption from the COVID-19 crisis, it will be difficult to apply this simple analysis of unemployment rates to the forthcoming election in November, where Trump will seek a second term. Nevertheless, it is likely that racial oppression, discrimination and police brutality are going to remain big issues in US politics. The deciding factor will be how far white voters stay with Trump. They are not only the biggest group of voters, they are usually also the group with the highest voter turnout.[2]

Tony Norfield, 18 June 2020
[1] A recent Reuters report gave a quick summary of racial economic inequality in the US, looking at unemployment, home ownership, net assets and stock ownership here
[2] Pew Research Center estimates that in the 2016 US Presidential election 65.3% of whites voted, 59.6% of blacks (down from over 65% in 2012, and ahead of whites for the first time), 49.3% of Asians and 47.6% of Hispanics.
Posted by Tony Norfield at 11:52 am

Trump will probably win again. Seems crazy but Biden is a weak candidate and Trumps core vote still seems quite solid.
And trump usually finds a way to cheat.

Another possibility is a tied and disputed election, that could be a dangerous time

I think you hit the nail on the head when describing the roots of Trumpism and I would argue all fascist movements. Whenever I hear Trump supporters I am reminded of the Eastern European attitude toward Jews during the 1920's, 1930's and 1940's. They don't want work, they are lazy etc etc.

The story of the holocaust never mentions this, that is because holocaust memorial is all about justifying the high crimes of Zionism, and therefore the elft have to be the target.

But for the far right welfare and social safety nets and a loathing for the poor, even by other sections of the poor has always been their bedrock.

In the USA this manifests along racial lines more than in other places.