The economic impact of the 2007-08 financial collapse was mitigated in some countries by state policies, especially from central banks. In the US, the UK and a few other major countries, there was thereafter a recovery of sorts, but even this appears now to be fading. A recovery did not even really start in some other countries. In this note, I want to draw attention to some background financial data that do not get as much attention as the data for economic activity, although they are often more important indicators of what is going on.

Firstly, consider the information contained in a recent IMF report on the scale of direct government support for the financial system after 2007 in Europe and the US. The data shown next include the cost of direct bailouts, including nationalisation. But they do not show central bank purchases of private (bank) assets, such as mortgage-backed securities (MBS) which, they hope, will end up being worth more than they paid for them. For example, the US Federal Reserve owns around $1,700bn of MBS, equivalent to about 10% of US GDP. Nor do these figures include the huge amounts of government securities bought by the US Fed, the Bank of England and the European Central Bank and others in their 'quantitative easing' programmes. 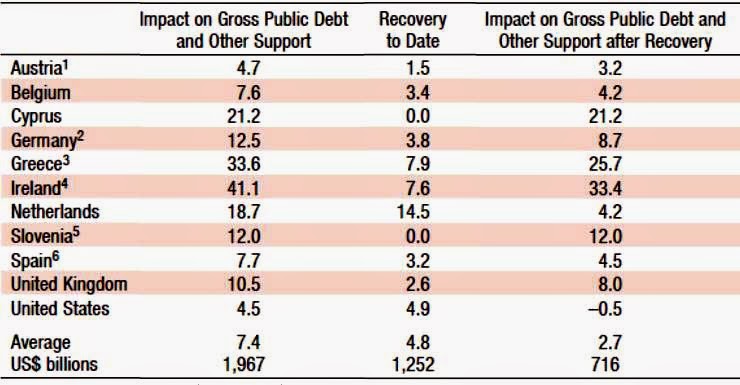 The previous table shows that most states have managed to claw back some 'recovery' of their initial support money (these data are for the period to June-2014), for example by selling back shares in previously nationalised banks. So far, the US can even claim to have made a modest profit on its support operations, but that ignores the Fed's MBS purchases and other implicit guarantees. At the other end of the spectrum, Cyprus, Greece and Ireland have borne a sharp rise in their gross public debt, one little reduced by the recovery of funds. For all countries, except the US (though with the previous caveats), the situation in 2014, some six years after the crisis hit, is a worse public debt position.

Public debt is, of course, the fount of all evil from the perspective of the IMF, despite the recent rise being a function of the collapse of private sector capitalism. So, it is worth noting two charts of what is presumably 'good' debt: leveraged loans and margin borrowing to purchase equities on the New York Stock Exchange. These charts are taken from a Canadian financial research foundation, IOSCO, in a report released earlier in October.

Here is the picture for leveraged loans, broken down by region:

The blue bars in the chart are the total of leveraged loans, measured in billions of US dollars. In 2014, the outstanding volume of such loans was just below $2,000bn, higher than in 2007 (the peak bubble year for all such data), and it is expected to fall only modestly in 2014. The main source of the rise has been in the US. With central bank interest rates at zero, such loans do not incur much interest cost. This encourages enterprising parasites to 'invest', commonly advancing only a tiny proportion of their own capital compared to what they have borrowed from banks. They make use of tax laws on debt and 'special purpose vehicles' to avoid inconvenient personal liability, either to tax or to troublesome losses.

By comparison, the rise in leveraged loans in Europe has been more limited, and remains below previous peaks. In the Asia-Pacific region, such loans have risen to new peaks, but the scale of the number - around $250bn - may cause less potential trouble.

One clear source of likely financial trouble, however, is the rise in a different kind of US financial leverage. The US equity market is the biggest in the world, and moves in these prices play a key role in driving all other equity markets. So have a look at how much money speculators on the New York Stock Exchange have borrowed to invest in equities:

Data up to end-August 2014 show that 'margin debt' (borrowed funds to invest in stocks) had risen to $463bn on the NYSE, a little higher than indicated by final data in the previous chart. Each of the strong accelerations in borrowing, shown by the deviation from the trend line, were followed a short time afterwards by a stockmarket slide. This was true for the dotcom bubble in 2000-2001 and the slump in 2008-09. Downward momentum is driven by the fact that the borrowed funds have still to be paid back, even if the equities those funds bought have dropped in value. And the S&P500 index has dropped more than 5% in the past four weeks.

Our politicians are already in a quandary over Syria, Iraq, Ukraine, ebola and a range of other issues. These items of financial data, let alone the weaker economic statistics for almost all countries, indicate that the dynamic of capitalist markets could become a further source of anguish.

Posted by Tony Norfield at 7:15 pm