The credit market works like this: one person's debt to another is the other person's asset. As long as the debtor can pay, then the creditor feels fine, if a little anxious when the weather changes. Now consider what happens in the wake of a credit-fuelled economic boom and its subsequent collapse. What if the mountain of debt is also a deep well of crap? That is the situation today.

This is the basic reason behind the never-ending policy from the world economy's major central banks to keep interest rates at close to zero. Every time there is a suggestion of raising interest rates (some time in the current century ...) from zero point nothing percent to zero point something, financial markets threaten to implode. Despite data in some countries recording improved profitability of capitalist companies, this is the more tangible reality of capitalist prospects.

News has not been good, in any case: from falling equity markets, to ever more desperate measures from governments and central banks, especially in Europe and the US. Below is a striking picture given for the US, by the Federal Reserve Bank of St Louis.

The chart shows the asset holdings of the US central bank, the Federal Reserve, since 2007 (the annotations are mine). In the initial phase of the crisis, the Fed boosted its lending to financial companies dramatically and did a series of rescue operations. These have now diminished to negligible proportions, as what remained of the US financial system was put back on its feet by zero interest rates and financial bail outs. However, there are two measures that have not been reversed. In fact, they have increased, even though the crisis was meant to be over: an increase in Fed holdings of US Treasury (government) securities, now totalling $2,457bn (data up to 22 October 2014), and mortgage backed securities of $1,417bn. Consider these figures against the US GDP in 2013 of $16,800bn, and also remember that the latter is just private debt to the state, not private debt to others, which is even bigger.

Many American citizens paying their mortgage interest will no doubt be somewhat surprised to learn that the recipient is actually the US government. Still, you can't keep an innovative, private capitalist system down, can you. As for the US Treasury paying interest on its bonds and notes to the US Fed, well they manage to find a way to get the money back again. The wonders of finance! 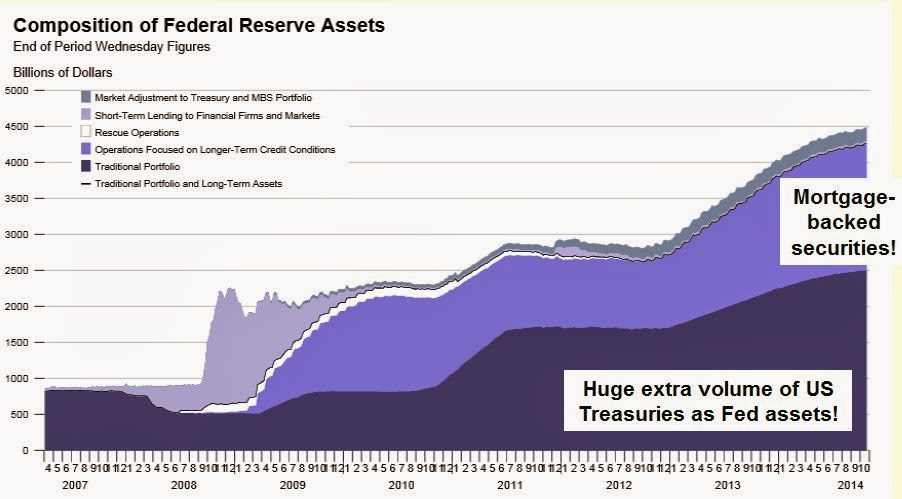 These numbers show more fully than monthly changes in business activity what is really going on, and the intractable nature of the crisis that imperialist countries face. Unfortunately, I have no such telling pictures of the European Central Bank's dodgy assets which, in any case, will soon be boosted by its new purchases of 'covered bonds'; nor of the Bank of England's activities. The Bank of England has up to now had a more conservative approach of hardly buying anything other than UK government securities in the secondary markets in its 'quantitative easing' (it has £375bn of gilts on this book and nothing else). However, the Bank of England has extended what it will accept as collateral, with the relevant 'haircuts', and also increased the ways in which it will offer 'liquidity' to the financial system in a crisis.

In summary, Lenin's description of imperialism as 'moribund capitalism' comes to mind. The astonishing application of extraordinary measures can only produce such mediocre results, ones that leave many millions in crisis.

Hello could you please clarify what you mean when you classify Treasury holdings of US Treasury securities and mortgage backed securities as "private debt to the state"? Sorry maybe I am a bit slow on the uptake but I don't understand that. As far as I understand, Treasury bonds are what the state's debt to private citizens because they are what the state sells when it needs to raise finance. Not sure about mortgage backed securities - aren't these things like Credit Default Swaps which are based on the ability of mortgage holders to repay their debts?

Glad to have found your blog - I am very interested in finance capital and currently reading Volume 3 of Capital.

Hello Biswadip, I have corrected the sentence that included the phrase 'private debt to the state' to make clear that I meant the mortgage backed securities, not the Treasuries. The Treasury securities on the Fed's books are the US state's debts to itself!

Note that credit default swaps (CDS) are basically insurance policies on the risk of a bond default. The CDS are not the same as bonds which have an interest return and a principal repayment, they are securities that give the relevant 'insurance' against the payment of a fee, usually per annum, for the lifetime of the swap.

Good luck with Volume 3 of Capital!

Thank you for the clarification Tony and looking forward to reading more of your thoughts!