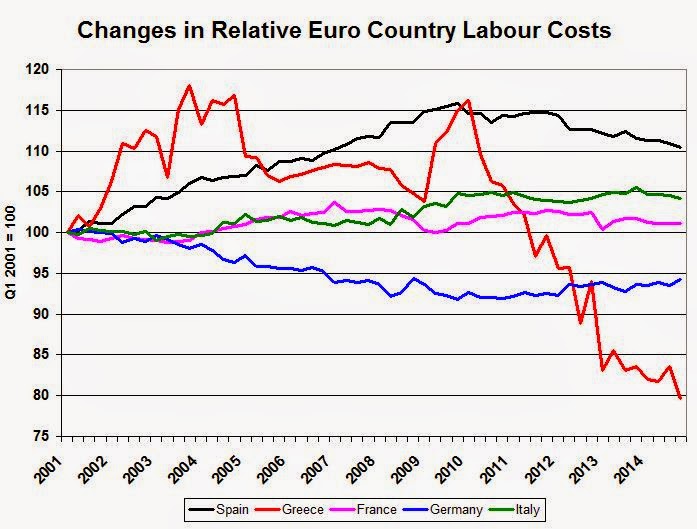 The previous chart is calculated from some recently published Eurostat data on labour costs in the business sector. For several euro member countries, I have compared changes in their average hourly labour costs (wages, salaries, benefits, etc) to the average for the euro area as a whole. Eurostat does not seem to publish absolute levels of these costs, and only gives an index number (2008 = 100 for all countries). It might be that one country's costs have risen faster than the average, but still remain below average, or vice versa. Also, these numbers take no account of productivity developments and just show changes in an employer's hourly cost of hiring a worker. Despite these qualifications, the picture is still striking.

The chart is indexed to 100 at the start of 2001, thus showing the relative change in each country's labour costs compared to the average since then. This is not to argue that 2001 is some kind of equilibrium year when everything was fine, it just makes the longer-term development easier to see than Eurostat's index numbers with 2008 as 100.

Greece also joined the euro in 2001, and it stands out in the chart. From 2001 to 2005, Greek labour costs rose by around 15% more than the average, then, after falling back, rose again into early 2010. Thereafter, relative costs slumped along with the Greek economy. In absolute terms, the level of Greek labour costs jumped from an index number (2008 = 100) of 76.7 in early 2001 to a peak of 113.4 in early 2010. By the end of 2014, the index number had crashed to 84.3. Nominal wage costs in Greece are back to where they were in 2002, and lower still when adjusted for inflation. On the face of it, this should be encouraging for capitalist employers, but there is still barely any sign of economic recovery. Profitable production depends upon more than cheap labour.

Spain stands out too, as the euro member country with the most sustained rise in relative labour costs. From 2001 to 2010 these rose by some 15% more than the euro average. Mass unemployment in Spain has made the gap narrower since then, but, by the end of 2014, Spain's relative costs were still 10% higher than in 2001. In absolute terms, Spain's labour costs have flatlined in the past few years, rather than having fallen drastically, as in Greece. Spain's index number (2008 = 100) rose from 72.3 in 2001 to 110 in 2012, where it has since stayed.