Nationalising banks might look like a good idea, especially if you think that private sector banks caused the worldwide economic crisis and that state ownership would eliminate the risk of it happening again. It would look even more attractive if you think that popular pressure on the state doing the nationalising would make sure that, in future, banks, or important parts of the financial system, would then benefit the national economy. This article explains why this view not only misunderstands what is really at stake but how it is a ‘reform’ proposal that can only endorse the capitalist system of power and control.
I do not claim that this proposal is at the forefront of most people’s minds, but it does come up in discussions and was also raised in questions on a lecture I gave at the Institute of Contemporary Arts on 6 October. Given time limitations, I preferred to respond to other questions from the audience in the Q&A session at the ICA and left to one side the question of calling for bank nationalisation. It would have taken more than a minute or two to respond adequately because it raises a number of different points. In the following paragraphs I will set out the key issues. Later this week, I will cover these points, and many others, in another lecture on the crisis (29 October, at the Marx Memorial Library, 37a Clerkenwell Green, London EC1R 0DU, 7pm).
---
Two views underpin the ‘nationalise banks’ proposal. First is the notion that there is a national economy that can be managed in a progressive way. Second is the idea that the capitalist state can be forced to do it by popular pressure.
Proponents of nationalisation are aware that, in the wake of the crisis, many capitalist governments have already put some institutions into state ownership, even in the home of liberal financial regulation, the US and the UK. In the US, this was called putting important financial companies into ‘conservatorship’ to avoid the politically charged term. In the UK, the term ‘nationalisation’ was also avoided, and the government made a special effort for the largest affected banks, RBS and Lloyds, to keep a portion of their shares in private hands. However, not embarrassed by the capitalist state having upstaged their demands, proponents of nationalisation would argue that the state could have forced these banks, and others, to redirect their lending policies to boost domestic industry, investment, employment and the economy in general.
A belief in the benefits of nationalisation is more than simply naïve. It reflects the view that the capitalist state is like a weapon that can be taken from the hands of the capitalists and used against them in favour of the mass of people. So the state, with its laws, institutions, multi-layered backing and means of applying influence and force can be redirected in a progressive way, rather than remaining a capitalist machine churning out policies that reflect capitalist class power. Proponents of such a view avoid the key distinction between taking power away from the capitalist class and advocating reform policies within a framework that keeps the capitalist class in place. This is why, when reform proposals fail – when they are rejected by capitalist markets as unworkable – the reforms are junked and the reformers are either kicked out of office or capitulate to the demands of the market. Worse than this, such a political stance always has the logic of demanding that the state do something for the mass of people. It is not a demand for social resources to be put into things that people need and organising people to do this. It is a plaintive call for the capitalist state to deliver on its ‘obligations’, ones that it does not have except in the imaginations of the reformers.
Then there is the question of the role of finance and banks in the capitalist system. What is called a ‘financial crisis’ is the outward expression of a more serious and fundamental problem. Recent decades have seen a boom in financial transactions, new ‘financial instruments’ such as derivatives, and massive loans and debts worldwide. Especially in the 2001-2007 period, these helped boost global demand, output, employment and ‘prosperity’, especially in richer countries. However, these things ran well beyond the production of value and profit in the world economy. The bubble then burst when US mortgage defaults hit financial markets. The impact was so big because these financial markets had become inflated worldwide. Essentially, this boiled down to a problem of capitalist profit versus the huge level of debt and the ability to pay off this debt, or not – with the problem then of taking the losses. The following chart from a recent report from the Bank for International Settlements illustrates that the debt problems have not gone away, and were even worse at end-2014 compared to the size of the global economy than in 2007.
Core Debt in Non-Financial Sectors, % GDP 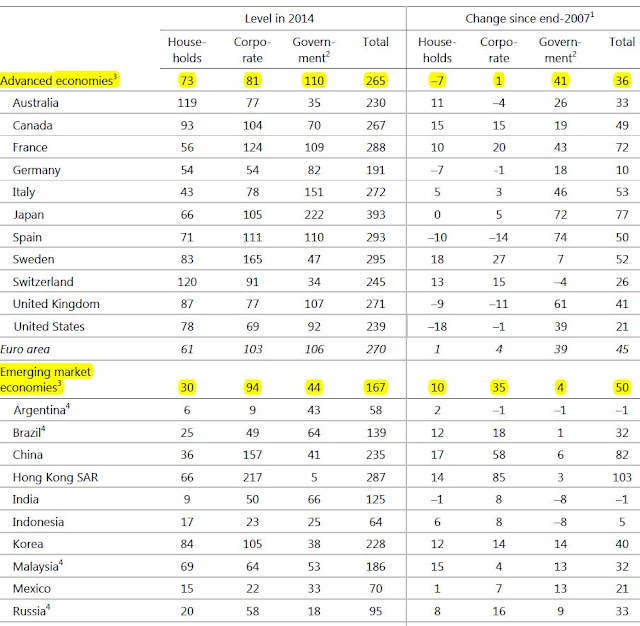 All this has not that much to do with banks. Yes, banks played a part in the process of credit creation and financial excess. Yes, the banks were bailed out with ‘taxpayers’ money’. Yes, most people would prefer to see senior bankers in jail or under a bus, rather than retiring on huge pensions. But financial power in the modern world is not confined to banks, and is certainly not constrained within national boundaries.
Financial securities are issued by and traded by banks, but the securities are mainly issued on behalf of the many industrial and commercial companies that are otherwise seen as the good guys versus the ‘bad bankers’. As Marxist theory shows, and as common sense would endorse, value is created by productive workers. From this value, profits are derived, and commercial capitalists and financiers share in these profits. They are all directly concerned with and benefit from the exploitation of workers. Furthermore, the major capitalist corporations operate internationally, backed by their states, and the ones from the powerful countries can use their financial leverage, though mergers with and acquisitions of other companies, to increase their economic power in the world market. This also has little to do with banks: all kinds of financial and non-financial company are involved in this process. One study showed, using data for 2007, that just 50 companies, largely based in the major powers, controlled through cross-shareholdings around 40% of the equity in a total of 43,000 international companies based in 116 countries. Most of these 50 were financial companies, but they were mainly asset managers and insurance companies, only a minority were banks.
In the light of this reality, the idea that nationalising banks will rectify the national capitalist economy is ludicrous. It is an idea based on a nationally-oriented social democratic delusion, one that soon becomes political support for the national state to protect the domestic economy against the ‘unfair’ policies of other countries. Recently in the UK, the loss of steel industry jobs due to a decline in the world market has led to demands from across the political spectrum that the British government take action against cheaper imports of Chinese steel. This makes a defence of jobs and livelihoods dependent upon state action to oppose another country, rather than showing how the job losses result from an outmoded, dysfunctional capitalist system of production. Worse still, it encourages the natural opposition that workers have to bearing the consequences of capitalism to become a demand for the state to defend the national version of capitalism against other national versions. In the UK case, it is all the more naïve when the policy of the British government is to expand deals with China, both to finance energy and other infrastructure projects that local capitalists will not do and to open up financial transactions with one of the few expanding areas of the world economy as a means of boosting British imperialism’s revenues.
To conclude, I should add that I am not, in principle, opposed to taking control of the banking system. But the precondition is first to have a progressive, anti-capitalist force taking political power to make this work, also known as making a revolution. That is something British radicals do not want to mention because its probability shrinks under the weight of a very long experience. The irony is that even with such political power and control, the issue of ‘nationalisation’ does not necessarily arise. For example, the Bank of England was nationalised in 1946, but that has made no difference to its operations as a supporting institution of British imperial power. The European Central Bank is also owned by its respective national governments, but has hardly been progressive in its policies. More importantly, since when has nationalisation been a sign of a socialist outlook, except in the capitalist state-oriented outlook of the British Labour Party and the delusions of its radical supporters?