The paperback version of my book, The City: London and the Global Power of Finance, is released today. This edition contains a sixteen-page Afterword on the following topics:
These develop and update points raised before.
---
With a cover price of £10.99 and US$16.95 in the global book market, the paperback version of The City is currently available at the following prices:
Verso, £7.69
Amazon.co.uk, £9.98
Amazon.com, $11.52
An eBook is also available.
Do your own calculations! 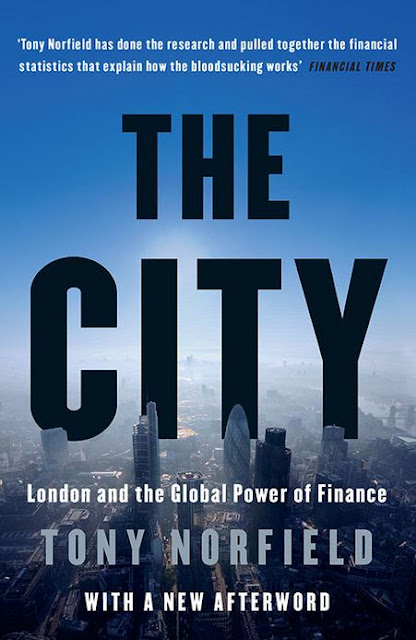 Selections from some of the reviews for the hardback edition:
“It is not every day you read a book about global finance by a banker who quotes Lenin approvingly on page two. Unlike many of those who produce Marxist critiques of financial capitalism, Norfield writes from a position of experience: he has worked in the belly of the beast, and the book is the better for it...In The City, he has done the research and pulled together the financial statistics that explain how the bloodsucking works.” – Brooke Masters, Financial Times
“Tony Norfield has provided a strikingly original take on the international financial system by placing it systematically within the world imperialist structure of power. He rejects the currently fashionable path of interpreting the ascent of finance by looking at how the leading financial sector agents, operating by way of banks, hedge funds, private equity firms, and the like, manipulate the political-economic game to increase their own personal wealth, while downplaying any useful economic functions they might be fulfilling. He insists, on the contrary, that finance be understood as a form of power deriving from the economic-cum political capacity to compete at the highest levels of global capitalism, which simultaneously endows a limited group of countries and corporations disproportionate access to the world’s resources and operates as the system’s indispensable nerve center. Norfield’s unusual clarity as both an analyst and expositor is reflected in his ability to lay out for his readers an easy-to-grasp introduction to how finance works today in the process of offering a detailed historically-rooted account of the multiple hierarchies and privileged relationships through which global economic domination is constructed and reproduced. The City is a tour de force, which will soon be recognized as a formidable challenge to conventional wisdom and an essential contribution in its own right.” – Robert Brenner, author of The Economics of Global Turbulence
“This book does the seemingly impossible: rendering finance’s mysteries transparent to the average reader, and at the same time delivering a penetrating analysis of the global economic system that will enlighten even experts. Tony Norfield has written a truly exciting and important book.” – Paul Mattick, author of Business as Usual
“The City is a valuable addition to the critical analysis of the financialisation of our world. And Tony Norfield is an experienced and radical guide to London’s role in this process. This book should be required reading for both bankers and activists alike.” – Joris Luyendjik, author of Swimming with Sharks: My Journey into the World of the Bankers
“A timely and insightful book...It is an excellent read for anyone seriously wanting to consider the financial system” – Scottish Business Insider
“With heaps of empirical research and a clear style of argumentation, he demonstrates that the City isn't a "satellite of Wall Street" as many think, but its own beast, using Britain's imperialist privilege to extract value from the world economy. Much of the book is directed against bad arguments made by the liberal-left – the distinction between "productive" capitalism and "casino" banking; the populist vitriol against "the banks" – which Norfield believes aren't just analytically false but let capitalism off the hook.” – Yohann Koshy, Vice
“An invaluable book for anyone wishing to better understand the world of finance, how the City operates and how this relates to the broader capitalist system.” – Tom Haines-Doran, rs21
“Tony Norfield has had 20 years experience in City of London financial dealing rooms, for ten years as an executive director and global head of FX strategy in a major European bank. He went on to complete a PhD in economics at SOAS, London. Above all, he is a Marxist. It’s a perfect recipe for an excellent book on modern British imperialism and the features of global finance in the 21st century.” – Michael Roberts (author of The Long Depression)
“How many Marxists are at work in the dealing rooms of the City? Presumably they keep their heads well down. Tony Norfield is—or was—one. Twenty years a trader at the centre of the financial web, he has married the insights into the workings of the system he gained to a thorough Marxist understanding of political economy. The result is this fascinating book.” – Andrew Murray, Morning Star
“Tony Norfield's opus The City takes on a big subject and makes it, well—big … Casts a new light on a well-researched subject.” – William Clutterbuck, Financial Adviser
“As England and Europe prepare to set the terms of Brexit, Norfield’s historical perspective on how England has promoted finance is fascinating.” – Tom Groenfeldt, Forbes