I first wrote about Lenin’s stay in London in May. By chance, I have just come across a book published in 2000 that gives some interesting details of Lenin’s visits to London from 1902.[1] My previous article provided the solution to that author’s question about what happened to the bust of Lenin that was originally unveiled in 1942. Here I note some of the points she makes about Lenin’s visits. I am not usually one to dwell on such details, but it is a nice irony of history that the UK, a centre of anti-communism in the 20th century, and still today, was also a minor aid to the success of the Russian Revolution in 1917.


Lenin’s visits to London were more by necessity than choice, with political restrictions on operating in Russia under the Tsar or in some other, closer European countries, such as Germany and Belgium. London housed a number of radical Russian émigrés, but also a small group of UK radicals with a printing press. So Lenin wrote to Harry Quelch of the Social Democratic Federation, asking if he could print Iskra (The Spark, the revolutionary journal) from their offices in Clerkenwell.


In April 1902, Lenin moved to 30 Holford Square in Islington, renting two rooms with his wife Nadezhda Krupskaya. Pamela Shields notes that they breakfasted on bacon and eggs, washed down with beer because the poor water quality was a health risk. Lenin worked on Iskra in the Twentieth Century Press offices at 37a Clerkenwell Green, the building which is now the Marx Memorial Library, and which was not far to walk from Holford Square. He sat at a desk in a tiny office close to Harry Quelch, while Krupskaya was busy at Holford Square, deciphering cryptograms and sending coded messages to agents in Russia.


From April 1902 to May 1903, the Clerkenwell printers were responsible for Iskra numbers 22 to 38. During this period, a certain Lev Bronstein, later known as Leon Trotsky, arrived at Lenin’s home and told him that Iskra, for various reasons, was not getting through to Russia. The decision was taken to smuggle in the four-page Iskra into Russia on thin paper wrapped inside the knee-high boots of supporters!


In 1902-03, with his comrades, Lenin organised meetings of the Russian Social Democratic Labour Party (RSDLP), usually in pub rooms and with them pretending to be trade unionists. One room was also booked in the name of the ‘Foreign Barbers of London Association’, which was just as well since they were speaking Russian. On several occasions, the London Metropolitan Police attempted to eavesdrop or find out what was going on, but they had little luck, not least because their fluency in Russian left much to be desired. Lenin made further visits to London, including in 1907, and the last one, I believe, was in 1911. 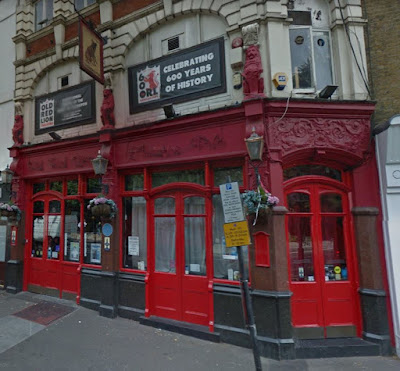 It is not known what Lenin liked to drink in the various London pubs he frequented, including the Crown and Woolpack, which closed some years ago, and the Old Red Lion, both in St John Street EC1. This was before his work on imperialism, so it is possible that he sampled India Pale Ale. However, one suspects that he would have rejected light and bitter as a typical Menshevik compromise.

[1] Pamela Shields, Essential Islington, Sutton Publishing. It is not clear that there were as many as six separate visits to London as she claims. Her book is available on Amazon.
Posted by Tony Norfield at 4:37 pm

Hello Tony. My husband found this link. I am tickled pink you talk about my book. Writers rarely get acknowledged. Sutton went bankrupt so the copyright of Essential Islington: From Boadicea to Blair reverted to me. It is on our to do list for reprinting. We have been to Islington to take photos for it. It can be bought second hand on Amazon. We have re-printed my first book Islington: The First 2000 Years which mentions Lenin. It is available from Amazon. As for confirming exactly how many times Lenin visited London I have alas mislaid my original research. However I do mention Lenin in Hertfordshire: Secrets & Spies. John Buchan was in Letchworth Garden City in secret. I have a theory it was to track Lenin who visited friends there. I gave a talk to the John Buchan Society as an invited gust of Buchan's granddaughter. She was intrigued. Good wishes. Pamela Shields. scribbling4bread@gmail.com