The partition of India took place seventy years ago today. British media coverage of the event focuses on the bloodshed that followed and, not surprisingly, ignores the role of the British in fomenting divisions between Muslims and Hindus. Narendra Singh Sarila's book, In the Shadow of the Great Game: the Untold Story of India’s Partition (Harper Collin, 2005 and 2009), fills this gap. 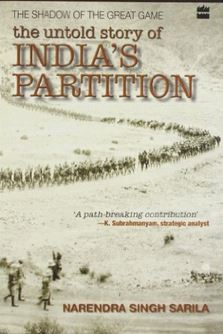 This is the only book I have found that explains what was in it for the British when India was partitioned in 1947. It shows how the British backed Muhammad Ali Jinnah in his opposition to the Indian National Congress, and how they encouraged the formation of Pakistan as a dependent state that they could better rely upon to be anti-Russian than an independent India. Historians usually avoid this and instead explain partition by claiming that there were deep-rooted ethnic/religious differences that demanded a Muslim Pakistan separate from a Hindu India.
A highly recommended book that highlights another crime of British imperialism, and one that has had repercussions long after the formal end of colonial power.
Tony Norfield, 14 August 2017
Posted by Tony Norfield at 6:55 pm

I would be very interested to read this book. Good supplementary reading, if one can find it, is 'Lineages of the Present', by Aijaz Ahmad, a great writer on complex issues in this oft-misunderstood region.

I am not sure to what extent intentionality and deliberate design play a part in the construction of geopolitical realities such as partition in an unregulated and uncontrollable social environment such as that associated with the capitalist mode of production. Obviously the extremely cursory recommendation you have given us for this book does not encourage us to read too much into it but it strikes me as somewhat simplistic to place all the "blame" for partition on the Muslim League. I think there is plenty of evidence to suggest that Jinnah only came round to accepting the demand for a completely independent Pakistan (as opposed to autonomy within a unitary state) relatively late, and that too because of the attitude of some of the Congress leaders. Gandhi himself was of course completely opposed to partition (even as his use of Hindu iconography antagonised the League) and opposed it long after Congress had come round to accepting it. One of the greatest lacunae in the historiography of the era (apart from the motivations of the British which you have mentioned) is the question of the INA and its leader Bose and many of the documents relating to this, both in Britain and in India (and, if certain reports are to be believed, in Russia), remain classified for reasons best known to the powers that be.

I am not placing 'all the blame' for partition on the Muslim League, and instead note the role, extensively documented in this book, of how the British promoted Jinnah and did their best to split India in a way that suited their geopolitical interests.

Well yes maybe I think I will have to reserve further judgement until I have taken a look at the book. Incidentally, going off on a slight tangent, I recently saw an excellent Hindi movie from the seventies at the NFT in London about the effects of partition on a Muslim family in India. It is called "Garm Hawa" ("Hot Winds") directed by MS Sathyu - highly recommended.