Europe has a long history of violence. Against the advances in philosophy, science and the arts, one must weigh the prolonged episodes of war, massacres, pogroms, colonial terror and oppression. The latter do not look good, so there is often a convenient framing of events in Europe’s historical memory, one that finds no place for the bad stuff. For example, every European country has its own mythology about the Second World War. Although the myths usually cannot withstand the slightest collision with facts, they nevertheless continue as persistent reference points for the mass of people in a particular country.
The UK has a particular weakness for this, with images of how the Dunkirk spirit, squadrons of spitfires and Churchill’s wartime speeches saved the day and led to victory over Nazi Germany. For some reason the historical ‘memory’ does not consider how it was that British deaths in the Second World War numbered only some 300,000, less than 1% of the population, compared to more than 25 million killed in the Soviet Union, 14% of its population. In the biggest confrontation with Germany that turned out to be the turning point for the whole war – the Battle of Stalingrad from August 1942 to February 1943 – the Soviet Union suffered nearly 500,000 killed or missing.

A record of how many people died in a long and extensive war is difficult to pin down with any precision, but the following map gives an interesting picture of the order of magnitude for different European countries in the 1939-1945 period. Brackets below the totals for each country show another chilling statistic for the murders of Jewish people. The bulk of the figures are from Germany, Austria, Central and Eastern Europe and the Soviet Union, but it is also worth comparing the absolute numbers with the sizes of the relevant populations to get an idea of the scale of the human destruction. While Poland’s number is large in both absolute and relative terms, six million dead (of which three million Jews) and around 17% of the population, Latvia’s and Lithuania’s figures are much smaller but still more than 12% of their populations. A Wikipedia tabulation here gives a fuller record.[1] 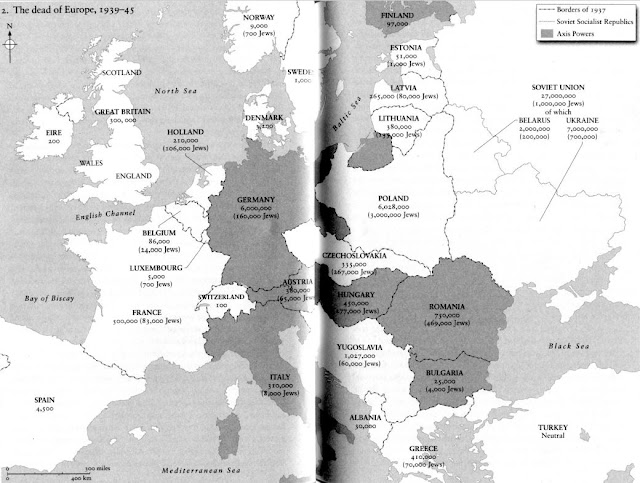 With its topic being World War Two, the previously cited Wikipedia article and tables do not spell out that the human carnage in Europe continued until well after 1945. That is the focus of a book by Keith Lowe, from which the European map is taken: Savage Continent: Europe in the Aftermath of World War II (Penguin/Viking, 2004). To read Lowe’s review of post-war Europe is shocking, even if one first allows for the fact that it is unlikely that violence completely stops when formal hostilities cease.
Among other things, Lowe’s book details the continued attacks on Jewish people from 1944-45, especially in Central and Eastern Europe. Discussing the anti-Semitism and pogroms in Poland, he notes that
‘Poland was easily the most dangerous country for Jews after the war. At least 500 Jews were murdered by Poles between the German surrender and the summer of 1946, and most historians put the figure at around 1,500.’
It was not only murder, but also looting and theft:
‘In Hungary many peasants came into possession of decent clothes and footwear for the first time when the property of expelled Jews was shared out in 1944. In Poland, where the Jews had made up a substantial portion of the middle class, a new, Polish middle class rose to take their place.’
As you might imagine, any Jewish people returning home did not have much success in getting compensation.
But don’t think the violence was limited to anti-Semitism. The immediate post-war years had to deal with the aftermath of the destruction, with famine and millions of ‘displaced persons’ across the continent. Although some former collaborators with the German occupation found a way into the post-war establishment, they also risked humiliation or summary execution. Under the cover of revenge by resistance fighters, personal scores were settled. More importantly, there was a dramatic trend of ‘ethnic cleansing’ in the immediate post-war years.
In terms of numbers, the most striking development was the expulsion of over 11 million Germans from countries in Central and Eastern Europe. These were the so-called Volksdeutsch, the long-established populations of expatriate German speakers. Many also suffered forced labour in camps in Poland and Czechoslovakia.
Often the attacks on different groups were linked to their supposed role in the war. But the motive of revenge easily came to embrace all those in the ‘wrong’ community. Referring to developments in 1944-46, Lowe notes the tens of thousands killed in Poland and the Ukraine: ‘Poles and Ukrainians slaughtered one another and burned each other’s villages with an enthusiasm that far exceeded any of their actions against the German or Soviet occupiers’.
There was an attempted genocide of Serbs in Croatia, and Hungarians were expelled from Slovakia. Summing up on the Central and Eastern Europe dimensions, Lowe puts it like this:
‘These were the kinds of actions that were taking place all across Europe. Hungarians were also expelled from Romania, and vice versa. Albanian Chams were expelled from Greece; Romanians were expelled from Ukraine; Italians were expelled from Yugoslavia. A quarter of a million Finns were forced to leave western Karelia when the area was finally ceded to the Soviet Union at the end of the war. As late as 1950 Bulgaria began expelling some 140,000 Turks and Gypsies across their border with Turkey. And so the list goes on.’
‘As a result of all this forced population movement, Eastern Europe became far less multicultural than it had been at any time in modern history. In the space of only one or two years, the proportion of national minorities more than halved. Gone were the old imperial melting pots where Jews, Germans, Magyars, Slavs and dozens of other races and nationalities intermarried, squabbled and rubbed along together as best they could. In their place was a collection of mono-cultural nation-states, whose populations were more or less ethnically homogeneous.’
These events, barely 70 years ago, are something to consider when you observe the reactionary developments in European politics today.

Tony Norfield, 2 October 2018
[1] The Wikipedia article lists casualties from a wide range of countries, not just in Europe. Notable is the huge number of deaths in China, some 15-20 million and 3-4% of the population. China is little covered in films and books on the Second World War, but a good source is Rana Mitter’s Forgotten Ally: China’s World War II, 1937-1945, First Mariner Books, 2013.
Posted by Tony Norfield at 7:20 pm