Another Day Older and Deeper in Debt … 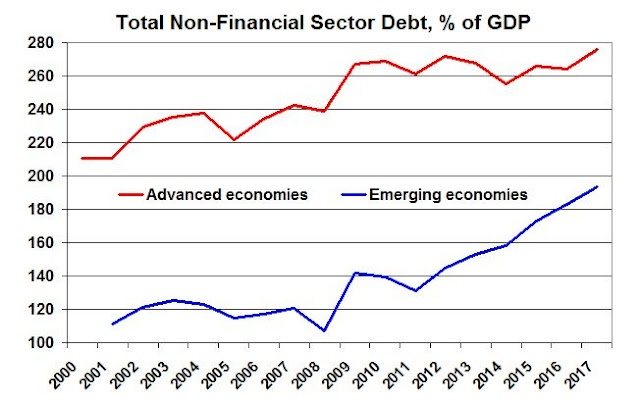 The question of debt is often absent from media coverage of the progress, or not, of the world economy. But a troubling problem is that debts have continued to rise since the 2007-08 crisis. Compared to the size of the economy, the total outstanding debt of the non-financial sector rose from just over 200% of GDP at the end of 2008 to over 244% at the end of 2017, with a 10 percentage point jump in 2017 alone.[1] Given that world economic growth remains weak, this is not likely to be a sign that optimism about future prospects has led to more borrowing for investment and consumption. Some recovery was likely once the banking system had been stabilised, but the latest numbers are the highest on record.
High debt is a dull, but debilitating burden for corporations, consumers and governments who have built up their borrowing. But this liability is also an asset for those who have lent their money or bought the debt securities. The latter include not only banks, but directly or indirectly, many corporations and consumers, especially the rich and those whose pensions and other income relies on interest and debt repayments. So the debt cannot just be wished away with no consequence. For example, even if banks wrote off the debts owed to them, this would damage their finances and risk insolvency, with further repercussions throughout the financial system, as became clear in the wake of the 2007-08 crisis. 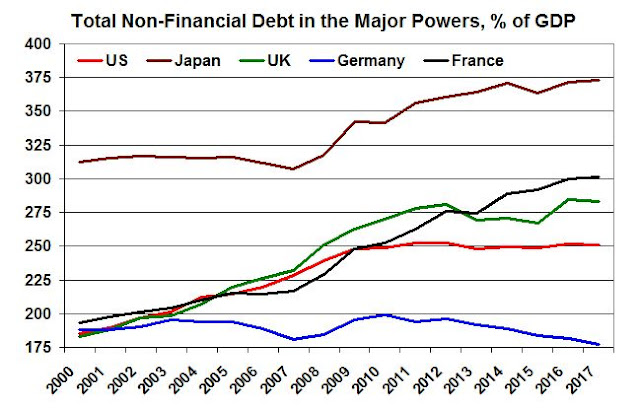 The latest data from the Bank for International Settlements show a worse picture for global debt than indicated in a note I made on this blog a few months ago (see also the article with country details two years ago). As remarked before, the burden of debt will increase not only with its level – indicating how much has to be repaid eventually – but also with any extra funding cost that comes from higher interest rates.
On the latest data, both the ‘advanced’ countries and the ‘emerging market’ countries as a group showed a rise of debt compared to GDP in recent years. The rise in emerging market debt was from a much lower base, but much more rapid. Pictures for different countries are mixed, however.
Among the advanced countries, debt ratios stabilised in the US, though they have remained at a high 250% of GDP. They have fallen in Germany to around 175%, down from near 200% in 2010. In France, debt ratios have now risen to just over 300% of GDP; Japan remains the basket case, with a rate rising to 373%. 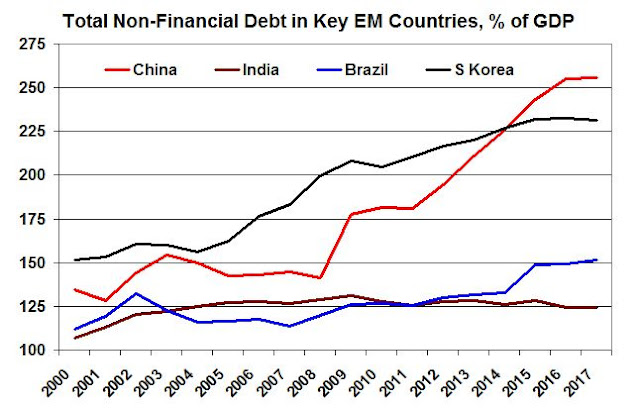 In emerging market countries, for many the debt ratio has stabilised in the past year or two. China’s rose strongly in the previous decade to just over 250% of GDP, but may have now flattened out. Similarly for South Korea, which now has a debt ratio of around 230%. Brazil’s debt ratio is lower and has steadied at around 150%. India’s is lower still, and has been flat at close to 125% of GDP.

[1] The figures are for the more than 45 areas reporting to the Bank for International Settlements, a group that includes all the major ‘G10’ countries and also the principal ‘emerging market’ countries such as China, Brazil, India, Russia, Korea, Indonesia, Philippines and Turkey.
Posted by Tony Norfield at 12:21 pm

what is the significance of looking at non-financial debt here as opposed to combined financial and non-financial? (reading your essay on value theory and finance now)